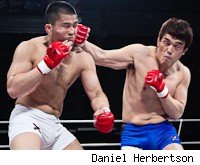 TOKYO, Japan -- Yuki Kondo traded up in his interim strap for a full version of the Middleweight King of Pancrase belt with a decision win over Ichiro Kanai at Differ Ariake on Thursday.

Kondo was slow to start, controlling the center of the ring and working kicks to the body and legs but failing to do any real damage until the third round where he started to fully bring punches into the equation. There, Kondo quickly bloodied his opponent with scrappy combinations, earning him the close decision (30-29, 30-29, 30-29) on all three judges cards.

Former Flyweight King of Pancrase Mitsuhisa Sunabe got back on the winning track with a KO win over 2-6-1 Hayato Sato. Sunabe looked better from the onset, finding his range early and then late in the first round, landed a hard kick to the head as Sato bent for a takedown and then Sunabe pounced on his downed opponent to finish the job.

Sunabe lost his title back at Pancrase Passion Tour 1 in February to Kiyotaka Shimizu by majority decsion and requested a rematch with the champ after the fight.