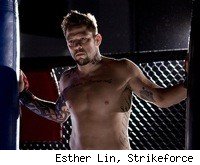 Renato "Babalu" Sobral, not Jason "Mayhem" Miller, will face Robbie Lawler in the main event of Strikeforce's Wednesday, June 16, show in Los Angeles, sources close to the organization tell MMA Fighting. The fight will be contested at a 195-pound catchweight.

Prior to Strikeforce: Nashville, CEO Scott Coker told a small group of reporters that the organization was planning on putting together a Miller vs. Lawler main event, but it appears as though the pending investigation by the Tennessee Athletic Commission into Miller's involvement in the post-fight brawl on CBS forced Strikeforce to change its plans.

Bobby Lashley and KJ Noons have also been officially announced for the event, but their opponents are not known at this time.

The event will mark the organization's first midweek show. It will air on Showtime from the Nokia Theatre in Los Angeles in conjunction with the E3 Expo, a popular video game convention. Strikeforce is expected to have a large presence at the convention due its involvement in the upcoming EA Sports MMA video game, which will be released later this year.

Sobral (35-8) hasn't competed since he lost a Strikeforce light heavyweight title fight via knockout to Gegard Mousasi in August 2009, while Lawler (17-5) is coming off a first round knockout of Melvin Manhoef at Strikeforce: Miami in January.