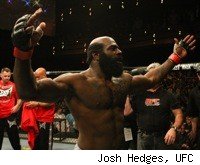 With his light-heavyweight trial run in the rearview mirror, Kimbo Slice is back to being a happy heavyweight. Back in his comfortable division, the MMA and crossover star returns to the cage at UFC 113, facing fellow Ultimate Fighter season 10 cast member Matt Mitrione.

Interestingly, in discussing the fight during a recent edition of "Inside the Ultimate Fighter," Slice seemed to indicate a desire to move out of his comfort zone in a different way, employing a rarely-seen ground attack.

"I'm sure he's probably going to try some takedowns, he's going to come with some stupid kicks and try to do something stupid," he said. "I hope he doesn't poke me in my eye and try to win the fight that way (Mitrione won a TUF 10 fight against Scott Junk that included an eye poke). Other than that, I'm going to try to take this fool to the ground and knock him out."

Building on his recent momentum, Slice has continued preparation with the vaunted American Top Team, and says the interest in taking the action to the ground is a by-product of that training, along with a necessary evolution.

"It's mixed martial arts now, so if I stick to being one-dimensional and just focusing on standup, I'm selling myself short," he said.

Asked for his feelings on Mitrione, who was arguably the most polarizing figure on the show last season, Slice said he was indifferent.

"I don't like him, I don't hate him, he's like whatever," he said. "He's not a guy I would be friends with, or a guy I'd call a common enemy. But I do want to punch him in his face and knock some blood out of his mouth."

Mitrione will likely be the bigger man by 20-25 pounds come fight time, but it's not a factor that worries Slice, who said that despite being a smaller heavyweight, "I hit as hard as those guys at 275-285."

In his last fight, against Houston Alexander, Slice won a unanimous decision but received some criticism for what was perceived to be a lack of action. The Florida-based fighter didn't quite see it that way, saying he fought a disciplined, patient style out of respect for Alexander's power.

That fight was contested at a 215-pound catch weight, but Slice says any thoughts of him going to 205 are pipe dreams.

"If [UFC matchmaker Joe Silva] and Dana White and my manager Icey Mike, if these guys really want me to fight a light-heavyweight or a particular fighter, by right it would have to be a catch weight," he continued. "If the fans want to see Kimbo fight some dude, and that dude's not a heavyweight, let's do a catch weight. If the money is right, damn right I'm going to fight him. I'm not going to turn down any fights."