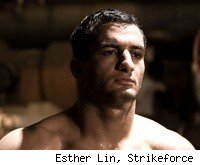 Sources within the organization tell MMA Fighting that DREAM will hold a four-man elimination tournament in July, with the winners facing off for the title later in the year. Right now, DREAM's July event, DREAM.15, is scheduled for the 19th of the month.

According to the sources, Gegard Mousasi will "for sure" be a part of it, and they are hoping Renato "Babalu" Sobral, as well.

The reason given as to why the light heavyweight tournament was postponed was due to the fact that DREAM couldn't find eight top-level competitors to commit to it.

DREAM.14 is scheduled for May 29, headlined by Nick Diaz vs. Hayato Sakurai.

The organization currently has champion in its featherweight, lightweight and welterweight divisions.