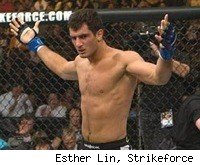 DREAM's light heavyweight tournament won't be taking place next month after all.

The eight-man tournament was scheduled for DREAM.14 on May 29 at the Saitama Super Arena in Saitama, Japan, but sources tell MMA Fighting that it has been scrapped.

It is still unclear why the tournament has been canceled, but SI.com's Josh Gross reported Wednesday that it was due to an issue between the organization and its broadcast partner, Tokyo Broadcasting System.

DREAM has yet to officially announce the cancellation. No word on whether the tournament will take place at a later date.

While none of the participants were officially announced by the organization, Gegard Mousasi, Rameau Thierry Sokoudjou, Renato "Babalu" Sobral, Yoshiyuki Nakanishi and Chrisitan N'Pumbu were rumored to take part in the tournament.

This is the second setback DREAM.14 has suffered. The event was originally scheduled for April 24 in South Korea, but was postponed several weeks ago.

Below is a look at the current DREAM.14 fight card: