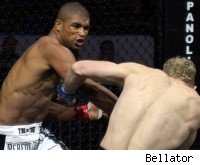 Bryan Baker headed into Bellator's eight-man middleweight tournament field as the favorite, and he did little to dissuade any believers, needing just 2:34 to earn a first-round TKO stoppage over Sean Loeffler.

Baker used an inside leg trip to take the fight to the ground just a minute in, and that's where it stayed the rest of the way as "The Beast" opened up Loeffler's defenses with a left to the body before going with more conventional strikes to the head. Loeffler eventually turned to his stomach and ate a few more punches before the referee called a halt to the action.

It was the sixth straight win for Baker, who raised his record to 12-1 in advancing to the semifinals.

All four of Thursday night's fights were middleweight tournament bouts.

Jared Hess, who had his only career loss in last year's Bellator 185-pound championship fight against Hector Lombard, began his march back to another title opportunity, stopping Ryan McGivern with a second-round guillotine choke.

Hess controlled the action in the first round, and in the second, the two were working for position against the fence when Hess snatched the guillotine, taking McGivern to the ground with him. Hess locked it up and McGivern tapped at 1:54 of the round.

Alexander Shlemenko announced himself as a credible challenger in the field, storming into the organization by pummeling Matt Major over the course of three rounds in earning a unanimous decision victory.

The Russian Shlemenko was the last announced competitor into the middleweight field after being delayed by visa issues, but he looked none the worse for wear, using a vast variety of strikes in dominating the fight. Featuring an arsenal of spinning strikes, Shlemenko bloodied Major in the first round and did everything but finish the fight.

"He was a very tough opponent," Shlemenko said through an intrepreter. "I underestimated him a little. If I changed the combos I would've finished him faster."

Off a ground scramble, Schambari locked in the choke from half-guard, using all his bodyweight to close off Zachrich's blood supply. Zachrich wasted little time in tapping.

"I could hear him in trouble, so I kept squeezing as tight as i could," said Schambari, who improved to 12-1.

Pairings for the semifinal round were not immediately announced by the promotion.