Kyacey Uscola on 'TUF' Experience: 'They Do Their Best to Drive You Insane' 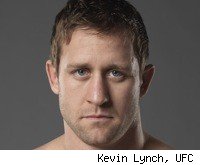 Kyacey Uscola sacrificed a lot to be on this season's edition of The Ultimate Fighter.

The 28-year-old former collegiate wrestler missed the birth of his first son to be on the show. He ended up winning his preliminary bout to earn a spot in the house, but lost his next fight to Rich Attonito when he was disqualified for landing two illegal knees.

And while it currently looks like his gamble might not have paid off, it's still unclear whether Uscola will get a chance to redeem himself on the show because Attonito broke his hand in the fight and appears to be out of the competition.

MMA Fighting recently asked Uscola about his experience on the show, which airs Wednesdays on Spike TV, and the Team Alpha Male member said it was tougher than he expected.

"It was tough, man. I went into that thing thinking, 'Ah, six weeks, no problem.' But it was nerve-wracking. It was a lot tougher than I thought it would be.

"You don't prepare yourself for what you're really getting into. They take away your freedom. You can't just jump into your car and free your mind. You can't just go into a grocery store. You're just locked down. You don't have your own schedule. No TV, Internet, cell phones, iPods, magazines, books ... nothing. I mean, they do their best to drive you insane."

While previous cast members have complained about the editing on the show, Uscola said that, thus far, he's been happy with everything he's seen on television.

"It's actually really legit. You know, they don't portray anything that didn't happen, so far at least. They kept it pretty legit."

Uscola, who was selected third overall by Tito Ortiz, has competed in BodogFight, Gladiator Challenge and King of the Cage. He's fought the likes of Gegard Mousasi, Chael Sonnen, Trevor Prangley and Joey Villasenor, but lost to all of them. He entered the show with an 18-15 pro MMA record.

The Idaho-native said he was happy to get a shot on TUF, but in hindsight, wishes he would have taken his career a little more serious earlier on so he wouldn't have had to take the reality show route to get to the UFC.

"I would have rather been smart about my career and picked and choose my opponents and trained a little harder back in the day. But now that I'm here, I'm going to give it my all and role with the punches. I hope everything works out."