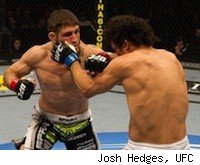 It's a mistake to expect too many serious answers out of UFC middleweight Tom Lawlor. As anyone who has seen his cage entrances already knows, this is a guy who puts a much greater premium on having fun than he does on impressing people. Even when it comes to assessing his own past performances, he doesn't put forth much of a sales pitch.

His win over C.B. Dollaway? Lawlor says he "got lucky and got a choke." Before that? He says he "pretty much just laid and prayed and dry-humped Kyle Kingsbury for fifteen minutes."

Sure, he might have gotten a Fight of the Night bonus for his narrow split decision loss against Aaron Simpson at UFC Fight Night 20, but Lawlor insists, "I'm not really much of a tough guy."

In case you're wondering what he did with the bonus check he got for that effort, don't. He'll just tell you he spent it all on KFC Double-Downs and drugs.

"Sometimes I buy drugs and throw them away just to help the local economy and keep drugs off the street. So I'm blowing my money in a lot of different ways."

One subject Lawlor will get somewhat close to serious about is his next fight. Not necessarily the opponent – he takes on Joe Doerksen at UFC 113 in Montreal on May 8, and he frames it as a fight that will see a "passing of the torch" from one generation of fighter to the next – but rather the entrance.

You see, Octagon entrances are kind of Lawlor's thing. After he entertained fans at UFC 100 with his own interpretation of nineties hit "Who Let the Dogs Out?" he followed up in his last bout with a Hulk Hogan-themed walk to the cage, complete with American flag and t-shirt ripping finish.

This time around, Lawlor is planning something to steal the spotlight from his Canadian opponent.

"I don't think it's going to be that big of a deal, seeing as the fight is in Montreal and Quebec seems to have their own mindset apart from the rest of Canada," Lawlor said. "I think there's enough anti-Canadian sentiment within the province, and I'm going to do my best to win over the fans in Montreal with my entrance and antics."

In fact, Lawlor's entrances have gotten so much attention recently, upping the ante with each new one is becoming a chore.

"Actually that's a huge problem now that people have come to expect this out of me. Eventually it's going to get to the point where I can't even do an entrance to top the ones I've already done. I'll have to come out without any music and walk to the cage while making no facial expression at all, but that's still a few fights down the road. At this point, I don't know if I can always top what I've done before, but I'm sure as hell going to try."

With just nine pro fights to his credit and only three in the UFC, Lawlor is still a work in progress. He admits that a lack of experience played a role in his loss to Simpson. While he had his opponent in trouble early on in the fight, he says he didn't recognize that he might have been on the verge of finishing him.

"Really I just learned that I need to work for the finish more. I can't leave it in the hands of the judges. Everybody says that and it's easier said than done, but I'm really going to make a concerted effort. I figure I can really only fight for two rounds anyway. I've had two fights go to decision and I've gassed both times, so I figure I have ten good minutes in me and I need to go out there and make those ten minutes count."

Lawlor claims that he isn't even upset about the decision not going his way against Simpson. He's watched the fight since then and can see why a judge might have scored it for his opponent. If anything, he's more indignant about seeing judges choose Leonard Garcia over "The Korean Zombie" at this past weekend's WEC event, calling it "a much worse decision" than the one he lost.

In retrospect, the only part of that particular evening he can even bring himself to complain about is the post-fight proceedings.

"The biggest problem was that the fight was in Fairfax (Virginia) and there was nowhere really to drink afterwards. There were also no fast food places open, so I had to buy twenty dollars worth of candy in the hotel lobby. It was a mess."

At least there's one problem he isn't likely to have in Montreal.