Tito Ortiz: I Never Laid a Hand on Jenna Jameson 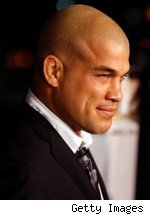 Ortiz was arrested and jailed earlier in the day on suspicion of domestic violence. The former UFC light heavyweight champion and current coach on The Ultimate Fighter posted a $25,000 bail.

At the conference (video below courtesy of the Chicago Tribune), Ortiz's lawyer Chip Matthews spoke on behalf of Ortiz by saying the problem was not domestic violence, but with Jameson's addiction to a pain reliever.

"We are here because unfortunately Jenna Jameson has been fighting a battle with Oxycontin addition for well over a year," Matthews said. "For Tito and his family this has been an uphill battle. Unfortunately this morning, Jenna had a relapse and suffered the consequences of that."

According to Matthews, Jameson denied the problem and had "some emotional breakdown" over it, when confronted Monday morning by Ortiz. And as Ortiz was leaving, Jameson contacted the police through another individual. Matthews added that both parties' families have been supportive of Jameson with her problem and asked for the public's support as well.

"I want to be quite clear," Matthews said. "Tito Ortiz never laid a hand on Jenna. Never."

Ortiz, who appeared distraught with his head down the majority of the time, then spoke for the first time.

"My parents have gone through an addiction and I've seen a mirror again [through Jameson]," he said. "And I'm not going to let my family go through that.

"I speak from the heart," Ortiz continued, on the verge of tears. "And as I say -- I'm going to let my man (Matthews) do his job -- but I hope everything dear to my heart that Jenna will be OK."