DREAM 14 to Return to the Cage 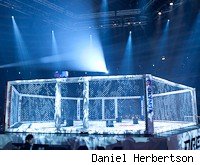 DREAM Producer Keiichi Sasahara today confirmed rumors that the promotion's next event, to be held on May 29th at Saitama Super Arena, would be returning to the cage.

"The White Cage", which was first used at DREAM 12, uses a tuna netting called "matrix" and is more flexible than the traditional wire cage. DREAM 14 will also return to the round structure we first saw at DREAM 12 - 3 x 5 minute rounds. For it's ring events, DREAM currently has one 10 minute round followed by a 5 minute round.

No other rule changes were announced which means elbows to the head of a grounded opponent will still be illegal.

The decision to return to the cage was made after a strong request from Hayato "Mach" Sakurai, among other fighters. Sakurai is currently in Seattle training for his upcoming bout with Strikeforce Welterweight Champion, Nick Diaz.

Sasahara stated that today's announcement does not mean that the promotion will be moving a cage permanently. DREAM 14 is set to be the opening round of the Light Heavyweight Grand Prix so this will probably mean that fighters will have to fight in both the cage and the ring within the tournament. When the cage was first used in October last year, it was said that DREAM will be using the cage once a year as an experiment.

It was also rumored that DREAM would be returning to PRIDE rules, meaning stomps and soccer kicks would be legal, but this was not announced. Sasahara did note that he was getting a lot of questions regarding rule changes however.

No additional fights were announced but Sasahara stated that he did hope to announce at least one match before the public holidays in Golden Week, which starts on April 29th in Japan.