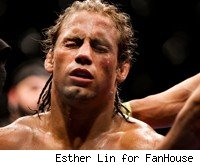 One of the tough things about combat sports is that fighters compete so infrequently that every single loss seems like the end of the world. In other sports athletes can usually end a losing streak the next day or the next week, but in fighting losses take on added significance because you won't get a chance to win again for months.

In the case of Urijah Faber, the former WEC featherweight champion who lost to Jose Aldo on Saturday, it's going to be at least a few months before he can put aside the ridiculous notion that he needs to retire.

Here's what Victor Contreras, the Deputy Sports Editor of Faber's hometown Sacramento Bee, writes that Faber should do:

Retire. Retire now, not after another loss in which you're cheered entering the octagon and booed leaving it.

Faber couldn't beat Aldo on Saturday night or any other day of the week. No shame in that.

Aldo is a young, powerful kid. He didn't even use most of his aggressive arsenal against a foe he truly respected.

Faber has made Sacramento proud, restoring pride to a once-great fighting city. He's a true warrior who has survived many battles.

Why risk tarnishing that image or risk the chance of injury?