Urijah Faber and the Price of Pride 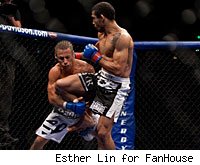 If there were any doubts that former WEC featherweight champ Urijah Faber is one of the gutsiest things on two legs, consider them now put to rest. Watching him grit his way through five brutal rounds in a losing effort against Jose Aldo on Saturday night was like watching a committed alcoholic belly up to the bar again and again. At some point your concern turns into awe, and then your awe turns into pity.

For Faber, that point might have been when he had to be carried into his corner between rounds. Or maybe it was when he found himself trapped in the crucifix position, absorbing punches and elbows to the head even as he stayed just active enough to prevent a stoppage. It would have been so easy to give up just then. All he had to do was stop moving for a few seconds and the punishment, which he had no chance to halt on his own, would have ended.

No one would have thought any less of him if he had listened to the small voice inside him that said, 'This is hopeless. Whaddaya say we call it a night and get some ice on this leg?'

The problem for Faber is that he's spent too many years learning to ignore that voice. That voice is a whisper now, if it even still bothers to offer its opinion at all. The only voice Faber still hears is the one telling him to get back up, switch his stance, and see if he can't find some way to stop the storm of leg kicks and turn this thing around.

He couldn't, but he was the last to realize it.

Aside from a couple of bursts of offense in the first round, Faber was never really in this title fight. Aldo was too quick and too elusive. He shredded Faber's legs with kicks and pounded his body with knees and hooks. By the time the ex-champ realized that he needed to take the fight to the floor, he'd been sapped of the explosiveness necessary to get it there. His pride wouldn't let him quit, however, so he kept marching into the buzz saw.

Pride is expensive that way. The price Faber paid was written all over his left leg after the fight. He got to spend Sunday afternoon watching it change sizes and colors. If it bothered him at all while he was posting pictures of his kaleidoscope flesh on Twitter, he didn't show it. That's how you know this man is in the right line of work.

In a way, Saturday night's performance might be one of the most memorable efforts in Faber's already great career. It's one thing to beat up on an opponent who's simply not in your league, as Faber did for most of his uninterrupted three-year title reign. It's another thing to find yourself on the other side of the equation and still keep coming. That's when you prove to people that you still have the heart of a champion, regardless of whether you have the belt.

Years from now fans will have forgotten his first-round knockout of Chance Farrar, and they probably won't sit around reminiscing about his guillotine choke finish of Jens Pulver. But odds are they'll never forget the night Faber was outmatched by Jose Aldo. The night he wouldn't give up, no matter what, even when they almost wished he would.