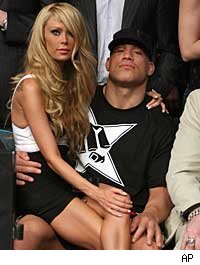 Reynolds said police can't make an arrest on suspicion of domestic violence unless there's a "visible injury," and the unnamed victim's injuries met that standard. Reynolds wouldn't elaborate, saying only that Ortiz and the victim have been "extremely cooperative."

Jameson and her father spoke to TMZ.com and other reporters outside the home Monday. Wearing a wrap on her right elbow, Jameson described herself as "completely shocked" by the incident, saying
Ortiz had "lashed out" at her, leaving her feeling "betrayed."

The 35-year-old Ortiz is among the most decorated and popular fighters in MMA history. He was the UFC's light heavyweight champion from 2000 to 2003 during the formative years of the sport's dominant promotion, making five title defenses before losing his belt to Randy Couture.

Ortiz, whose nickname is the Huntington Beach Bad Boy, is a former collegiate wrestler has been competing in MMA since 1997. He has been in a relationship with Jameson since 2006, and she gave birth to twin boys in March 2009.

After his career declined amid several injury problems, including major back surgery, Ortiz left the UFC in 2008 in a bitter dispute with president Dana White, his former manager.

Ortiz re-signed with the UFC last year, losing a split decision to Forrest Griffin in his return fight last November. Ortiz is winless in his last four UFC fights since October 2006, with his celebrity and high-profile relationship with Jameson overshadowing his octagon abilities.

Ortiz served as a coach on the most recent season of "The Ultimate Fighter," the UFC's popular reality television show currently airing on Spike. Yet he apparently was forced to drop out of the show during its taping earlier this year, and the UFC already has announced it will replace him with Rich Franklin for the show's traditional season-ending bout with fellow coach Chuck Liddell.