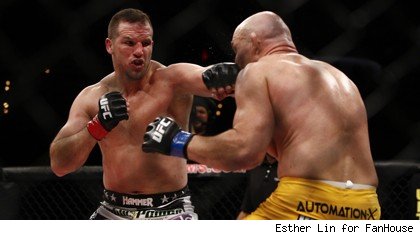 Call him Mr. TUF Finale. Matt Hamill has been selected once more to fulfill The Ultimate Fighter Finale headlining duties.

Spike TV confirmed Monday that Hamill will face Keith Jardine on the upcoming live card on June 19 in Las Vegas.

Hamill (9-2) is coming off a controversial win over Jon Jones last December that he was on his way to losing before Jones hit him with illegal elbows for the DQ. With the lucky finish, Hamill has reeled off three straight wins, over Jones, Mark Munoz and Reese Andy.

Jardine (14-8-1) is on a major slump with three straight losses, including back-to-back knockouts. Despite his 6-6 record in the Octagon, the 34-year-old Jardine is still a UFC name for his wins over Forrest Griffin, Chuck Liddell and Brandon Vera.

The other featured bout for this card will be the finals of this season's middleweights-only competition.