A Silent Cheer for Leonard Garcia and Chan Sung Jung 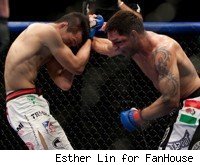 One of the cardinal rules of journalism's code of ethics is "No cheering from the press box." That rule was written forever ago, and whoever wrote it has never been infected by "The Korean Zombie." One of the great things about being a sports fan is going along for the ride when something transcendent happens. It doesn't have to be something pretty, like LeBron James gliding in for a dunk or Albert Pujols hitting a soaring home run that disappears into the night.

Sometimes, it's something raw, like the three-round epic staged on Saturday night by Leonard Garcia and Chan Sung Jung, aka "The Korean Zombie." Luckily for me, I wasn't on press row, but watching from my house, because the 15-minute slugfest the pair engaged in was the most riveting fight in recent memory. And since I had a pulse, I couldn't help but be swept up in what was transpiring.

The word "cheering" might suggest pulling for one side over the other, but in fact, any vocalization on my part during the bout was, shall we say, one of blessed disbelief. Some of the many, many exchanges that took place between Garcia and Jung were downright savage (according to Compustrike, each man landed 70 power strikes, a number rarely reached in five-round fights). Yet afterward, they smiled at each other, shared a hug and rode to the hospital together.

It was certainly no technical masterpiece; instead it was fighting at its essence – a grinding, brutal struggle to assert oneself over another man with an equally unbendable will.

In the end, the fans stood on their feet to serenade both fighters with cheers (press row stayed seated and quiet, of course), and the only negative moment to emerge from the fight occurred: the judges scored the fight for Garcia over Jung in a split-decision. The bout was very close, but I think most people believe Jung should have been declared the winner.

For the first time that night, Jung relented.

"I felt like right after the fight I won," he said. "I haven't seen the fight video yet so I can't decide. At this point the decision is made. I can't turn back time, so I accept the decision."

"I felt the little things I did do to outsmart him edged me out in the decision," Garcia said. "It was kind of hard for me to be a veteran and be the smarter fighter, but like I said I see a lot of him in me, and that's why I think I won the fight."

Regardless of any controversy, no one could steal the moment from the pair, who were clearly the buzz of the evening, even ahead of hometown hero Urijah Faber. The pair easily won the "Fight of the Night" bonus, worth $65,000 apiece. It was money well earned, and if ever a fight demands a rematch, Garcia-Jung is it, although I do fear for their safety.

"I'd like to have a fight like that every month, if my body could take it," Garcia said, causing WEC lightweight champ Ben Henderson's jaw to drop.

Well, alright then, Leonard, if you insist, I'll watch it. And this time I'll try to keep quiet, but I'm not promising anything.