The Comedy Stylings of Chael Sonnen 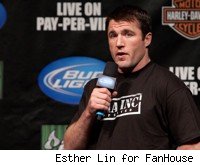 SACRAMENTO, Calif. -- Anderson Silva's track record of entertaining fights has taken a hit with his recent middleweight title defenses. But regardless of how his next fight actually plays out, it's safe to say that the publicity leading up to the fight will certainly be a crowd-pleaser.

During the WEC 48 fan Q&A Friday at the Arco Arena, host Mike Goldberg was not standing alongside Joe Rogan, but with a different man possessing comedic ability, Silva's next challenger Chael Sonnen, whom Silva will meet at UFC 117 on Aug. 7 in Oakland, Calif.

Ignoring at first Goldberg's first question to him, the man who brought you "I have a moral obligation to society to beat [Silva] up," Sonnen, began poking fun at the fact that there were no chairs on stage for him and the other special guest Jamie Varner.

"It looks like an IFL setup here or something. Where's the chairs at for me and Jamie?" the well-traveled Sonnen asked. "Am I supposed to stand up here and sweat the whole time or something? ... I thought I was back on BodogFight or something around here standing up this stage.

"I feel like Joe Rogan in front of one his comedy routines or something," Sonnen continued, before asking fans for a ride from his hotel to Rogan's show.

Sonnen confirmed details of the UFC 117 fight, but not without presenting one scenario in which the fight were to possibly not take place.

"That is true [of the Silva fight happening], on one condition, that is, if diplomacy fails," Sonnen said. "I am giving Anderson Silva the fair chance to back out and back out now. But as sure as night follows day if he does not heed my warning I will declare war and on Aug. 7 at 7PM his 15 minutes of fame will come to an abrupt halt."

Here are a couple of other gems from the Q&A session.

-- "James Toney I think without question is the best striker we got in this company. I think James Toney can outstrike anybody including Anderson Silva and I think everyone here would probably agree with me. Though everybody's dismissing James Toney, but they're accepting Anderson's skills. I dismiss both of those bums. That's what I think about them. I dismiss them both."