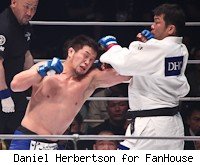 TOKYO, Japan -- Hidehiko Yoshida handed the torch to his student, Kazuhiro Nakamura at ASTRA, dropping a unanimous decision in his final fight in front of over 10,000 fans at the Nippon Budokan.

Michihiro Omigawa got a win in the books for Yoshida's sake, surprisingly getting out struck by a game Micah Miller and having to revert back to his judo to take the unanimous decision.

And as Yoshida bid us all farewell, Enson Inoue successfully returned after six years away, armbarring New Zealand native Antz Nansen at 2:10 of the first round.

More results and a breakdown of the fights after the jump.

While he was slow to start, Kazuhiro Nakamura chased down his mentor, Hidehiko Yoshida with superior speed and boxing, actually managing to take down the 1992 Olympic judo gold medalist. Heavy strikes landed by both fighters effectively threw out any speculation that this may turn into a glorified pro-wrestling match between the stablemates.

Round one saw Nakamura attempting to use his distinct speed advantage, darting in and out with lunging jabs to the body and head of a noticeably larger Yoshida. The 1992 Olympic judo gold medalist used the 38-pound weight difference to his advantage however, clinching with his student wherever possible to minimize his speed and striking disadvantage and effectively drawing the round.

The action was kicked up a gear in the second with both fighters taunting the other and Yoshida classically winging right hands while Nakamura brought low kicks and solid straight rights. Nakamura's crisper jab proved the superior weapon, forcing the larger man to resort to clinching again, but Yoshida found no more comfort there. In a move that surprised all in attendance, Nakamura landed an easy inside trip on the retiring judoka, bringing him to his knees where Nakamura landed elbows to the body and punches before being foiled by the ropes and bell.

In the final round of the legend's career, Yoshida chose to remove his trademark judo gi and to leave everything he had in the ring. As they had promised they would, both fighters walked straight to the center of the ring and clearly tried to finish the other with looping punches until again Yoshida is forced to clinch. Nakamura again took his teacher down and attempted to work some strikes on the ground. The 40-year-old's body was clearly starting to fail him towards the end of the third round, getting taken down multiple times but proving tough enough to survive a poetically dramatic armbar attempt in the last thirty seconds of his fighting career.

All three judges saw it 30-28 for the student, Kazuhiro Nakamura who know takes over the leading position in Yoshida Dojo.

Also, Nakamura may also become the leader of the ASTRA banner which, as Yoshida revealed, is set to continue and will now join Dream and Sengoku Raiden Championship at the top tier of Japanese events.

Fedor Emelianenko, Kazushi Sakuraba, Kazuyuki Fujita and Ikuhisa "Minowaman" Minowa were all present to deliver well wishes to Yoshida in retirement and Japan said farewell to a true legend with a teary final 10 count.

Another Yoshida Dojo judoka, Michihiro Omigawa appropriately went back to what he knows best in his decision win over Micah Miller. The American Top Team product utilized his height and reach advantage to out strike Omigawa, forcing him to use his judo to gain control of the fight. While Miller threatened with submissions from the bottom he was never able to secure anything too troubling for Omigawa who ground out a tough unanimous decision.

Omigawa is now 6-1 at featherweight, all against quality opposition and in only a year has turned his career around entirely.

Enson Inoue returned to the ring to show his appreciation after receiving over 9000 letters of support from fans while going through legal difficulties the past two years. His return was successful, as he quickly submitted a fighter he once cornered, Antz Nansen.

A week after his 43rd birthday, and on the day of his grandmother's funeral, Inoue landed a spinning backfist and then shot a takedown on the noted kickboxer. From the mount Inoue pounded away, missed with one armbar and then secured another from guard for the tap at 2:10 in the first round.

The Korean landed a hard superman punch and then stood over his felled opponent and wailed on him with hard, straight punches to bring a finish to the bout at only 1:16 in the second. Chonan was coming into this fight with only four weeks rest after a hard fought decision win over Andrews Nakahara at Dream.13 but requested to be on the card, regardless of his lack of preparation due to his respect for Yoshida.

While victorious over Naoyuki Kotani, Jorge Masvidal looked noticeably slower than usual in his split decision win. Both fighters had missed weight the day before but Masivdal, fighting out of American Top Team, clearly struggled badly with the cut. While his weight problems must have affected his performance, his striking gave him a slight edge which was enough for the win.

In the other bouts, Kiyoshi Tamura protégé, Daisuke Nakamura easily bested Ganjo Tentsuku over three rounds with his lightning quick jab and of course his flying armbar attempts, Deep Welterweight Champ Yuya Shirai disposed of former Cage Rage Champ, Che Mills with an easy first round armbar at 3:59 and Akihiko Mori derailed hot Yoshida Dojo prospect Tatsunao Nagakura with a left hook at 1:04 of the first round.