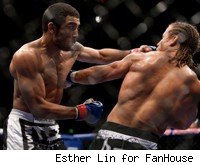 The 23-year-old Brazilian visited his challenger Urijah Faber's home turf in front of 14,144 fans at the ARCO Arena and turned in a dominant performance against the former champ Saturday night .

"I really like Sacramento," said Aldo, who headlined the WEC 48 card with Faber. "This is where I made my debut and this is like a home away from home. I hope they will adopt me as one of their stars too."

Aldo was too quick for Faber, battering the former champ with leg kicks early on and continuing the assault through the remainder of the five-round fight. By the third round, it was very apparent that the kicks had taken a toll on Faber. And desperate in the final two rounds, Faber resorted to playing off his back, a strategy reserved for traditional Brazilian jiu-jitsu fighters, not wrestlers who favor the top game.

With his legs hurt, Faber couldn't make a solid attempt at a takedown. The damage on his legs was so significant that after the cameras were turned off, Faber crashed to the floor and had to be helped up by his teammates.

The positive to come out of Faber's performance was his toughness, becoming the first opponent to take Aldo to a decision in the WEC. Aldo, who entered the fight with six straight (T)KOs, was cautious approaching the Faber fight.

"I'm always careful when I go in the ring, but what happened was that Urijah was doing a great job of covering things up and the only strike we kept landing was the leg kick, so I kept going for it hoping that he would open up," Aldo said. "But everytime I went in there to do something else, he was covering himself up very well. You have to take your hats off to Urijah Faber. He came in with a very good strategy and that was to protect himself."

Faber was taken to the hospital after the fight and did not attend the post-fight press conference.

It wasn't the rumble that people were expecting, but WEC lightweight champion Ben Henderson walked away in their rematch as the decisive winner, forcing Donald Cerrone to submit to a guillotine at 1:57 of the first round.

Although he was surprised at how quick the fight went, Henderson acknowledged that he wanted to prove a point that his close decision win against Cerrone in October was well-deserved.

"This time if I had to, i wanted to, to run though him real quick and finish it," Henderson said. "That's all I wanted to do was to finish this fight."

For the guillotine, Henderson walked away with the $65,000 bonus for Submission of the Night.

Manny Gamburyan (12-5) provided the upset of the evening, knocking former champ Mike Brown (23-6) out cold with a right hook followed by punches on the ground. With Gamburyan's reach disadvantage, Brown was the one who was favored on the feet. In the final exchange, Gamburyan ate a right hand, but his own counter was enough to command a seat in the WEC's title picture.

"I feel like I'm the No. 1 contender in the division," said Gamburyan, who won the Knockout of the Night bonus. "I'm not calling out Aldo or Faber, but I'll fight anyone that the WEC puts in front of me."

Shane Roller, now 8-3, stayed true to his strengths, taking down Anthony Njokuani and finishing with a rear-naked choke in the first round. Njokuani dropped to 13-3.

"A lot of people underestimated me," Roller said. "Hopefully this solidified that I'm the No. 1 contender in this division and I'm ready for the title shot."

Scott Jorgensen avenged a controversial split decision loss from a year ago to Antonio Banuelos that later saw both fighters each claiming the win. In the rematch, the wrestling based Jorgensen tested his own stand up and outstruck Banuelos two rounds to one for the unanimous decision win. Jorgensen keeps his top 10 ranking and improves to 10-3. Banuelos falls to 18-6.

"After the first round when I got knocked down and survived, I knew I wasn't losing this fight," Jorgensen said. "My trainer Kit Cope told me to just go out there and have fun and that's what I did."

Leonard Garcia (18-5) and "The Korean Zombie" Chan Sung Jung (10-2) stole the show with an action packed slugfest that felt like the WEC version of Forrest Griffin vs. Stephan Bonnar. And actually, a much better version. Chan was the fighter who landed the bigger shots, but it was Garcia who won the split decision, to the displeasure of fans -- even the Garcia ones.

"Once I heard the crowd scream for me, I knew I had to lay it all out there," Garcia said. "They pumped me up so much and I wanted to get the win for them. I broke my hand in the first round and coach [Greg Jackson] said, 'who cares -- you gotta keep fighting.'"

The Spike TV fight easily took Fight of the Night honors and UFC president Dana White said after that the fight was one of the best fights he's ever seen and probably helped boost pay-per-view orders.

Anthony Pettis picked up the win over The Ultimate Fighter 1 contestant Alex Karalexis with piercing leg kicks, urging Karalexis to look to take the fight to the ground. Karalexis did in the second, but Pettis showed he's fine on the ground as well, slapping on a triangle choke for the submission at 1:35. Pettis moved to 9-1, while Karalexis dropped to 10-5.

"I knew he was going to try and take me down," Pettis said. "I waited for him to throw a big punch and I was able to slap it on. He didn't tap right away so I hit him with a few elbows and got the submission."

Former Cage Rage champion Brad Pickett moved to 2-0 in the WEC with a decision victory over the undersized Demetrious Johnson. Pickett rocked Johnson twice with punches in the first round and dominated in the takedown department. Pickett appeared to have slowed after the first round and Pickett told the crowd after the fight that he believes he broke his collar bone in the second round. Pickett raised his record to 20-4, handing Johnson his first loss in 11 fights.

"He has a lot of energy that guy," Pickett said. "He's a tough guy, but I think my size helped me in this one. I think he would do well in the 125-pound division once they open it up."

Hometown favorite Chad Mendes utilized his wrestling background to take down Anthony Morrison to apply the guillotine choke for the first-round finish.

"I saw Joe [Benavidez] do it to Miguel Torres recently and I thought since him and I have the same body style, I could do it myself," said Mendes, who practiced front headlock guillotine for the past two weeks."

Takeya Mizugaki (12-4-2) kept his WEC career alive with a unanimous decision over 2007 ADCC champion Rani Yahya (15-6) in a match between two former bantamweight contenders. Mizugaki landed the bigger shots and survived on the ground to move to a .500 record in the WEC.

"It went just the way I expected," Mizugaki said. "I knew how good he was on the ground so I worked a lot of sprawling and takedown defense for this one."

In the opening fight on the live card, Ring of Fire champion Tyler Toner won his WEC debut by handing Hawaiian Brandon Visher the first loss of his five-and-a-half year career spanning 14 fights. Toner glanced a head kick and followed with a left hook that flattened Visher. From there, Toner finished with elbows.

"I went for the kick and I noticed he puts his hands down," Toner said. "That's when I threw the left. I knew the elbows were hurting him because my elbow was hurting."

Toner wins his WEC debut and improves to 11-1 with one no contest.

Urijah Faber punches Jose Aldo in the stomach at WEC 48 on Saturday, April 24, 2010 at Arco Arena in Sacramento, Calif.

Jose Aldo drills Urijah Faber with a body shot at WEC 48 on Saturday, April 24, 2010 at Arco Arena in Sacramento, Calif.

Jose Aldo hits Urijah Faber in the face at WEC 48 on Saturday, April 24, 2010 at Arco Arena in Sacramento, Calif.

Jose Aldo knees Urijah Faber in the chest at WEC 48 on Saturday, April 24, 2010 at Arco Arena in Sacramento, Calif.

Urijah Faber tries to connect against Jose Aldo at WEC 48 on Saturday, April 24, 2010 at Arco Arena in Sacramento, Calif.

Jose Aldo punches Urijah Faber in the body at WEC 48 on Saturday, April 24, 2010 at Arco Arena in Sacramento, Calif.

Urijah Faber punches Jose Aldo in the face at WEC 48 on Saturday, April 24, 2010 at Arco Arena in Sacramento, Calif.

Faber tries to recover after another leg kick from Jose Aldo at WEC 48 on Saturday, April 24, 2010 at Arco Arena in Sacramento, Calif.