James Toney vs. Randy Couture in the Works for UFC 118 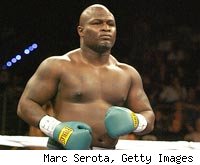 "It's good to hear Randy is Twittering stuff we haven't announced yet, but yeah, we're working on it," White said.

Although it's not a "done deal," White said it would happen in Boston, which would make it the UFC 118 event on Aug. 28 at the TD Garden.


The Toney-Couture has been the matchup of discussion for Toney ever since the boxing champion inked a contract with the UFC early last month.

Hours after the signing was announced Couture campaigned for the fight via Twitter by saying "I hope I'm the first guy they call to fight Toney!" and minutes later, "I hope they set me up with Toney!"

Toney expressed the same sentiment a week after when he pointed MMAFighting.com to Couture as a fighter he would most like to face in his first MMA bout.

"Randy Couture is a legend," Toney said. "He's a great dude. If we fight I'd have to take my time and pick him apart. If that's my first fight, it'll be a huge fight."

Toney is training with the controversial Juanito Ibarra, a boxing and MMA trainer notably responsible for not only guiding Quinton "Rampage" Jackson to the UFC light heavyweight championship, but at the same time, an involvement in a messy split that culminated with Jackson's high-speed car chase.

Currently slated for UFC 118 is a pair of compelling lightweight bouts, the BJ Penn vs. Frankie Edgar title rematch and a Kenny Florian vs. Gray Maynard top contender contest.