Could Jose Aldo Be First Fighter to Win Three Titles? 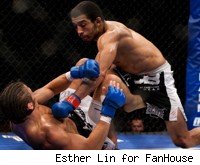 "I had heard that he wants to move down a weight class, win that belt and then go to 155 to fight BJ in the UFC. If he can do that, I don't know if he can cut that weight and make that light a weight division, but he'd be the first guy to win three titles in three different weight divisions," White brought up to reporters late Saturday after WEC 48.

Aldo could make bantamweight, though it would be a difficult cut. Aldo, who previously fought at the weight during his early years with Shooto, last year considered moving down to challenge the then-dominant Miguel Torres. But Torres would fall into a slump while Aldo continued to tear through the competition.

Aldo, who retained the 145-pound WEC championship over Urijah Faber at WEC 48, would be contending at 135 pounds with the likes of champion Dominick Cruz and contenders Brian Bowles and Joseph Benavidez.

It's a rarity if Aldo could pull it off, but if he is indeed interested, he's got the support of the UFC and the WEC "pay-per-view" boss.

"I think it'd be pretty interesting. I love stuff like that," White continued. "I think if a guy proves himself at a certain weight class it's time to move on and try something new and I like that. but it's so hard to do in this sport because there's such a gap between weight classes. You can't be like [Manny] Pacquiao [jumping] seven different weight classes."