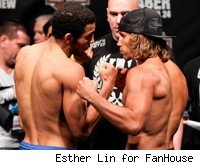 For years, the WEC has been the go-to promotion for can't-miss excitement in the MMA world. What the little guys lacked in power, they made up in speed and stamina. Rare was the time when you would tune in to a WEC event and not see a three-round classic. Saturday night was no different. As usual, the smaller-weight fighters showed a little bit of everything. They threw bombs, they showed submission artistry, they went bell-to-bell. They delivered. The only thing missing was the three letters that brought us all here: WEC.

You may not have noticed, or you may not have cared, but the WEC logo and name was nowhere to be found on Saturday. It never came from the lips of Joe Rogan, Mike Goldberg or Bruce Buffer, who not coincidentally, are not the usual WEC announce team. In fact, Zuffa did everything it could to blur the lines of this event and persuade casual fans that what they were seeing was a "UFC" production.

The plan was alternately brilliant and head-scratching.

The positive? Maximum exposure; White and the UFC brand receives plenty more attention than the WEC, and they milked it for all it was worth. The negative? Confusion; some casual fans weren't quite sure what they were seeing. Case in point: Ben Henderson was not the WEC lightweight champion, but "the lightweight champion of the world," which of course would be news to Frankie Edgar, or Gilbert Melendez for that matter.

Some people might wonder why any of this is a big deal. After all, we tune in to see the fights, not a brand, but, it makes you wonder what the WEC fighters have been fighting for all along. Yes, they got the opportunity to fight on pay-per-view, but not under the brand they've been trying to build for years. Zuffa President Dana White said earlier this week that it was a "strategic" decision, but was the strategy simply selling as many pay-per-views as possible, or is there something more long-term in mind?

"At the end of the day, it's about the fights that night," White said. "I just wanted to make sure we could expose these fights to as many people as possible. A, B, D, E, F, G. It doesn't mean s--- to me. We just want to sell some pay-per-views."

The WEC has never done numbers that approached those of the UFC, and that clearly played a big role in the decision. White and the Zuffa braintrust know that there is a baseline number that all UFC pay-per-view events do, almost regardless of what fight is filling the main event slot. So blurring the lines and pushing the fight with White as the carnival-barker made perfect sense. If people tuned in to Spike at 9 pm ET and watched Anthony Pettis submit Alex Karalexis or Leonard Garcia outlast "The Korean Zombie" Chan Sung Jung in an epic, they might have been confused into thinking they were watching a UFC undercard and purchased the ensuing pay-per-vew.

That was no accident; Zuffa decided the undercard fights airing on Spike would give them maximum exposure and essentially function as a one-hour commercial for what was to follow on pay-per-view. The reason no "WEC" logos were allowed was because Spike wouldn't allow them; after all, the WEC's true home -- Versus -- is a competitor.

If some fans got hoodwinked into buying the event, they probably wouldn't be too upset with the $44.95 cable bill that's going to follow. While none of the fights on the PPV portion of the card were classics (Garcia vs. Jung was the definitive show-stealer), you couldn't walk away feeling upset about watching Antonio Banuelos and Scott Jorgensen go to battle, you had to be shocked about Mike Brown falling prey to Manny Gamburyan's striking, and Henderson's guillotine win over Donald Cerrone was pretty stunning.

The main event may have lacked a finish, but it's impossible to deny Jose Aldo his place among the world's pound-for-pound elite after essentially dismantling Urijah Faber.

There's no question the WEC fighters delivered as they seemingly always have, but the question I keep coming back to is, What is the long-term benefit of this pay-per-view aside from cash? Since there was no mention at all of the WEC, fans who were watching for the first time have no idea how to watch these guys again.

Zuffa has always kept the big picture in mind with what they were doing. Years ago they realized they needed a reality show audience to grow the product, and The Ultimate Fighter became their Trojan Horse to mainstream interest. But this decision almost seems to be the reverse, because it doesn't build to anything other than the moment. They sold the card as "Aldo vs. Faber," which means something for those two guys but doesn't necessarily help the rest of the WEC roster beyond this particular event.

So the question becomes, What is WEC's future fate? Will they be rolled into the UFC? This event essentially was an extension of the UFC brand. I've always maintained that fighters like Aldo, Faber and Miguel Torres would be worth more by simply placing them behind a UFC logo. Zuffa didn't go quite that far on Saturday; they did everything but. Because Zuffa's been so strategic in the past, it has to make you think that consolidation is the future. If they plan to promote every WEC pay-per-view card like this, it's almost worthless to have a second brand.

By its omission from the night's proceedings, it seems clear that the WEC name doesn't have significant value to Zuffa. Even if that's the case, that's OK, because it's obvious that the fighters do.