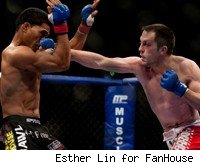 SACRAMENTO, Calif. - This is the WEC 48 live blog for the dark matches on the Aldo vs. Faber card at the ARCO Arena.

The unaired preliminary bouts for this card are Brad Pickett vs. Demetrious Johnson, Chad Mendes vs. Anthony Morrison, Takeya Mizugaki vs. Rani Yahya and Brandon Visher vs. Tyler Toner.

The first fight is scheduled to begin at 7PM ET. 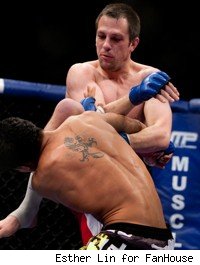 Close to half the arena already full for the first fight. The lower level is mostly fulled with only the balcony level empty.

Bruce Buffer makes the official introductions and the crowd cheers for the Voice of the Octagon's rare appearance inside a WEC cage. Herb Dean is your referee.

Round 1: Toner opens with a leg kick and a huge swing and miss with a roundhouse. Visher answers back with a straight cross and a leg kick. Visher throwing his cross more and almost gets counter-punched. A high kick is blocked by Visher and Visher storms in for a finish. Toner slows him down and backs him. Visher misses on a big right hand. Toner lands a left and drops Visher. Toner finishes with elbows and Dean stops the contest.

Beautiful finish with Toner glancing a head kick but following up with a left hook and a straight right miss. It was the left hand that knocked down Visher. 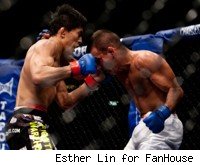 Jiu-jitsu ace Yahya walks out first. Mizugaki follows him to the sounds of Numb by Linkin Park. Josh Rosenthal is the ref.

Round 1: They size each other up. MIzugaki has a lower stance. Yahya shoots for the double. He works hard for it but Mizugaki reverses him and lands a few shots on top. Yahya recovers and digs again for the double. This time he slams him down. Mizugaki scrambles up using the cage, but Yahya drags him down. Yahya grabs the guillotine as Mizugaki postures up. Yahya lowers to control the standing Mizugaki's back. Yahya drags him down again and takes his back. Mizugaki though, is able to stand right up. Yahya throws the hooks in from standing. Mizugaki gets out and Yahya pulls guard. Referee allows all the time for Yahya to work off his back. Mizugaki misses a huge right. A short exchange has the crowd gasping. And another. Mizugaki lands a nice right in the middle of a combo. He lands uppercuts and knee to the body with Yahya against the fence. Mizugaki doing a good job trying to steal the round back. Mizugaki takes Yahya down with just under 30 seconds left. Mizugaki isn't able to do too much damage inside of Yahya's open guard.

Mizugki does enough to steal the round. MMAFighting.com scores the round 10-9 for Mizugaki 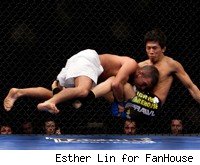 Round 2: Mizugaki times a leg kick and lands a right hand. The crowd is loving it whenever Mizugaki is throwing his right hand. Yahya swings and Mizugaki clinches. Yahya drops levels quickly and puts MIzugaki on his knees. Mizugaki is able to stand up and Yahya simply pulls guard with one butterfly hook. Mizugaki moves Yahya closer to the cage. The referee stands them up at 2:03. Mizugaki again lands with a right by timing a leg kick. Mizugaki throws big hands but misses. They slug it out until Yahya backpedals. Yahya pulls guard, but doesn't have enough time to work anything.

Mizugaki takes the second round 10-9.

Round 3: Mizugaki lands two leg kicks. Mizugaki with an uppercut to the body. Mizugaki throws a right and Yahya shoots. However MIzugaki is showing excellent takedown defense. Back elbows from Mizugaki ignites the crowd. Yahya tries to drag him down again but Mizugaki has good balance. Yahya tries again and this time takes Mizugaki's back. Yahya is able to get his right arm across. Mizugaki peels it off at 1:58. The crowd is enjoying this sequence on the ground. Mizugaki turns into Yahya's guard and the crowd claps. The crowd is pretty impatient but they're enjoying the fight still. Mizugaki attacks with elbows to the head and punches to the body. As a side note, Rosenthal once again shows why he's a great referee. He gave time for Yahya to work on the ground and didn't make decisions based on the crowd.

MMAFighting.com scores the third round 10-9 for Yahya and the fight 29-28 for Mizugaki. 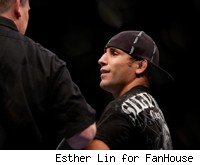 The 5-0 Mendes is the hometown guy. Morrison out of Philadelphia gets his music cut off halfway, interrupted by some Snoop Dogg. Mendes, nicknamed "Money," comes out to "Money, money, money." Mendes has Benavidez in his corner. Morrison has Raphael Assuncao. Not only does his music get cut off, Morrison gets boo'd during the announcements. Man gets no love.

Round 1: Mendes hits a leg kick. Mendes fires with punches and looks for the takedown. Morrison halts Mendes attack with punches of his own. Morrison sticks out two jabs and the latter appears to have landed. Mendes shoots from afar, but still gets it, right into halfguard. Mendes wraps a guillotine and Morrison taps. Mendes does a backflip for the crowd.

Round 1: Touch of gloves. Pickett lands a left that stuns Johnson. Johnson recovers to land a leg kick. Good head movement by Pickett to slip punches. Pickett with a big right that crashed Johnson against the fence. Pickett catches a kick but Johnson escapes. Pickett scores a huge takedown into side control. Pickett lands a nice uppercut as Johnson stands up. PIckett catches a kick and takes Johnson down. Pickett comes flying in with a punch and he takes halfguard. Johnson stands up and works a nice umbo combo followed by the kick. Johnson gaining support from the crowd with his head kicks. Pickett slams him down. Johnson back up and throws a flying knee only for Pickett to slam him again! The crowd is loving this fight. PIckett has side control with the Matt Hughes crucifix. Johnson can take the punishment. He stands up to throw more punches and finally a kick right at the bell. First round gets a standing O.

MMAFighting.com scores the round 10-8 for Pickett.

Round 2: Johnson likes the leg kicks and Pickett is looking to time the catch for a counter right. Pace has slowed a bit. Pickett scores the takedown at 3:10. Johnson throwing some nice kicks and landing with knees to the body. Pickett stops them by scoring another takedown. Pickett advances to Johnson's halfguard. Pickett trying to pass but Johnson stands, giving up his back. Pickett drags him down hard but Johnson controls his neck. They separate and Johnson returns to firing kicks. Pickett digs deep for a double leg and massive slam that would make vintage Matt Hughes proud. Pickett lands punches in full mount.

MMAFighting.com scores the round 10-9 for Pickett.

Round 3: Johnson tackles Pickett for the takedown. Pickett turns and is caught in a guillotine. Pickett escapes his head and they fight in clinch. Pickett reaches for the takedown and gets it. Pickett passes to Johnson's halfguard. Johnson stands and Pickettt has control of his opponent's back. Pickett lets go with a punch. Pickett with an overhand right. Fast punches by Johnson. Johnson scores another takedown -- his second of the round and the fight. Pickett stands and Johnson may have flipped him over. Back standing, Pickett scores the takedown with 1:42 remaining in the fight. Pickett has side control, and then full mount. Johnson hips out into halfguard. Johnson stands and he wants to throw but Pickett works for the takedown. Johnson almost rolls over him and Pickett shoots to put Johnson on his butt. Round over.

Much closer round, but Pickett should also take this one. MMAFighting.com scores the round 10-9 for Pickett and the fight 30-26 for Pickett.