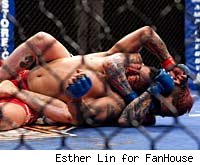 The first World Extreme Cagefighting pay-per-view card got started with a bloody bantamweight battle in which Scott Jorgensen defeated Antonio Banuelos by unanimous decision at WEC 48.

Banuelos landed his left hand repeatedly in the first round and eventually landed one hard enough to knock Jorgensen down midway through the first round. Jorgensen was very comfortable with Banuelos in his guard, however, and he nearly sunk in an arm bar before Banuelos got free and stood back up. On the feet Banuelos was getting the better of the exchanges and also landed a couple of good kicks to the body at the end of a good first round.

In the second round Jorgensen started to land his jab and bloodied Banuelos's nose. Banuelos was clearly having trouble breathing out of the nose and started gasping for air through his mouth. With a minute to go in the round Jorgensen knocked Banuelos down and got his back on the ground, pounding him as blood poured out of his nose. It was a dominant second round for Jorgensen.

In the third round Jorgensen took complete control by continuing to use his jab, which Banuelos had no answer for. Jorgensen was a three-time Pac-10 champion wrestler, but as the fight wore on he showed that he's much more confident on his feet than he was early in his career. With two minutes to go in the round Jorgensen knocked Banuelos down and got his back on the ground, and from there he spent the remainter of the round pummeling him. Give Banuelos credit for hanging on, but Jorgensen dominated the third round.

The fight was a rematch of a very good 2009 bout that Banuelos won by split decision. This time Jorgensen got the nod, as all three judges scored it 29-28 for Jorgensen. Both men said immediately following the fight that they'd be interested in doing it a third time. That would be a good fight, but Jorgensen has nothing to prove in the cage against Banuelos after beating him soundly on Saturday night.