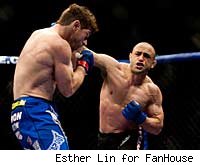 Manny Gamburyan knocked out Mike Brown in the first round of their featherweight fight Saturday night at WEC 48: Faber vs. Aldo.

Brown was a heavy favorite, but he looked uncomfortable on his feet from the beginning, and after feeling Brown out for a couple of minutes, Gamburyan landed a hard right hand that knocked Brown flat on his back. After a few more punches on the ground, Brown was out and the referee made the right decision to stop the fight.

"I'm very happy," Gamburyan said after the fight, adding that he thinks he deserves a featherweight title shot next.

Brown, the former featherweight champion of the world, has now had two tough losses, having previously lost his belt to Jose Aldo by TKO. Brown is strong on the ground and has a big right hand, but he clearly needs some work on his stand-up.

Gamburyan improved his record to 11-4, including 3-0 since moving down to the featherweight class in the WEC. Brown falls to 23-6.