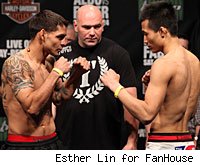 SACRAMENTO, Calif. - This is the WEC 48 live blog for Leonard Garcia vs. Chan Sung Jung, a featherweight bout on tonight's Spike TV prelim card at the ARCO Arena.

Garcia takes a fight just seven weeks from his last fight, stepping in for teammate Cub Swanson. Chan is making his WEC debut.

Chan, "The Korean Zombie," walks out to the Cranberries' Zombie. Excellent choice! Garcia enters to the Lil' Wayne song with Eminem, Drop the World. The crowd not a fan of zombies, apparently.

Round 1: Chan nails a leg kick. Garcia looking to finish with his right hand. Garcia lands a leg kick. Chan misses a big right. Both guys want the knockout. Chan lands a left. Chan with a jumping knee. He swarms Garcia. Garcia fires back. Wow, just a crazy slugfest. Both men are swinging for the fences. Chan lands an uppercut. That's as wild of a sequence as you're gonna get. Action slows when Garcia clinches Chan against the cage. Chan stalks Garcia. Garcia slips on a kick. Chan glances a head kick. Both guys may have tired themselves out during the exchange. Chan drops Garcia with a right. Chan with fast elbows. Garcia attaches an inverted triangle! He turns it into an omoplata. Chan escapes drops lefts. Chan drops punches. I take back the comment about them slowing down. Garcia gets to his feet. Chan with knees from clinch. Garcia swinging crazy hooks. Chan lands a head shot. Garcia lands. Chan lands. Chan with knee from clinch. Chan with rapid right hands. Chan defends the takedown.

MMAFighting.com scores the first round 10-9 for Chan.

Round 2: More back and forth action. Garcia rocks Chan. Chan is hurt, but he keeps swinging. They trade spinning back fists. Garcia shoots for the double. Chan defends. Garcia slams a left hook. Crowd chanting "Gar-c-ia." Chan lands a leg kick. Both miss on overhands. Garcia misses a spinning back kick and Chan capitalizes. Chan hops on Garcia's back with double hooks in. Chan with the body triangle. They fight for position and they end up standing. Chan sneaks in a left hand and lands a knees. Chan batters Garcia with punches. Garcia takes it. Garcia just swinging away. Chan grabs a front headlock. Garcia throws a head kick.

Very close round. MMAFighting.com scores the first round 10-9 for Chan.

Round 3: Crowd still firmly behind Garcia. Chan stalks Garcia. Pace has slowed, but only relatively to the first two rounds. Garcia missing a spinning kick. This round is going to be even harder to score if they keep this up. Garcia lands a kick to the body. Chan glances a spinning punch and follows that up with a flurry. Garcia sneaks in a jab. Garcia lands a leg kick. Chan with a flurry. Garcia answers. Chan lands a clean jab. and another. Both men are just winded. Garcia goes for the takedown, and it's stopped. Garcia taps a leg kick. Some more wild slugging (all missing) to end the fight.

MMAFighting.com scores the round 10-9 for Garcia and the fight 29-8 for Chan. I'm not entirely sure about the scores, but I can say both guys are getting the $65,000 bonuses tonight.

Even though the crowd was in full support of Garcia throughout the fight, they boo the decision.