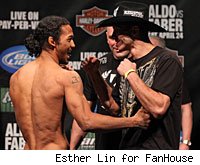 SACRAMENTO, Calif. - This is the WEC 48 live blog for Ben Henderson vs. Donald Cerrone, a lightweight title fight on tonight's WEC pay-per-view at the ARCO Arena.

Henderson defends his unified WEC belt against Donald "Cowboy" Cerrone in a rematch from WEC 43 in October which months later became MMAFighting.com's 2009 Fight of the Year.

Cerrone gets the long walk to the cage and the crowd cheers for him as he makes his way in the room. The undisputed champ Henderson is pumped, moving along to the music and acting out his confidence.

Uh oh, Cerrone rubbed his nipples during his official announcement. New champ tonight? Let's see if Henderson can pull it off without Greg Jackson voodoo.

Round 1: Cerrone controlling the middle of the cage. Henderson throws out a leg kick. He throws out a few punches and backs off. Cerrone throws a leg kick and Henderson immediately shoots for the single. Henderson pushes Cerrone against the fence and moves around his back. Henderson hits Cerrone with knees to the thigh and head. Henderson scores the takedown and immediately throws elbows. Cerrone tries to scramble out but Henderson quickly slaps on the guillotine choke, tapping out Cerrone.

Cerrone sits with his head down in disappointment as Henderson walks around the cage celebrating.