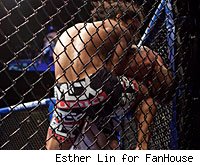 en Henderson needed less than two minutes to force Donald Cerrone to tap out with a guillotine choke Saturday night at WEC 48: Aldo vs. Faber, an absolutely dominant showing from Henderson that allowed him to retain the World Extreme Cagefighting lightweight belt.

Henderson got off to a good start by trapping Cerrone against the cage on the feet and landing a series of knees that Cerrone had no answer for, and once Cerrone turned around to try to protect himself against the knees, Henderson took Cerrone down to the ground and got on top of him.

From there, Henderson got into perfect position to sink in his favorite submission, the guillotine choke, and get Cerrone to tap at the 1:57 mark.

The fight was a rematch of a 2009 bout that was described as the Fight of the Year by MMAFighting.com, Sherdog/ESPN and Sports Illustrated, among others. That was a competitive, back-and-forth battle that Henderson won in a close decision, but this time around Henderson won easily.

"I like the guillotine, what can I say?" Henderson said afterward.