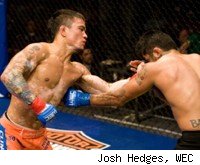 It doesn't hurt to have a backup plan even if you're considered one of the top 10 best in the world.

When Scott Jorgensen is not establishing himself as a contender in the WEC's bantamweight title chase, he is employed as a full-time marketing director for VIDA Senior Resources, a home care service for the elderly and disabled.

"When I first started fighting," Jorgensen recently told MMAFighting.com. "One of my good friends Glen Amador, I hit him up for sponsorship and it turned into an employment opportunity about three and a half years ago and I've been doing it ever since."

As the marketing director for Las Vegas-based VIDA, Jorgensen travels to different cities to help out other offices across the country. When he doesn't have a fight coming up, it's a 40-hour job.

Besides the additional income, the 27-year-old out of Boise, Ida. says the job allows him to fulfill an area of focus from his time at Boise State University, where he also became a three-time Pac-10 wrestling champion.

"I just enjoy helping people," he said. "I got my degree in psychology and a large emphasis of my college studies in psychology went towards improving quality of life. This is kind of my way without going back to school --I don't want to go back to school, I don't enjoy it. I'm not going to. Without going to get my master's or doctorate and all that fun stuff, this is my way to use my degree a little bit and at the same time help improve people's quality of life, who never had the same kind of break that I've had, and had a little bit of a rougher life."

On Saturday at WEC 48, Jorgensen will share credit with opponent Antonio Banuelos as the first fight to appear on WEC's first foray into pay-per-view. Jorgensen will see a higher payday fighting on a pay-per-view card, but as UFC president Dana White would admit, WEC entering pay-per-view is still an experiment. The success of the WEC is especially important for Jorgensen, who fights in the still-developing 135-pound division.

In the anything-can-happen world of MMA, the marketing job provides a measure of security for Jorgensen.

"If I couldn't fight tomorrow. What's my backup plan? How I am going to make my living? And this is my backup plan," Jorgensen said. "This is what I've got."