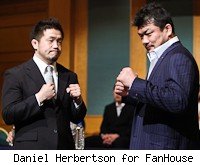 TOKYO, Japan -- Jorge Masvidal, his opponent Naoyuki Kotani,and Che Mills all came in overweight ahead of Sunday's ASTRA event to be held at the Nippon Budokan.

All fighters will have another chance to attempt to make weight again later Saturday but Masvidal was noticeably struggling and could be seen lying on the floor outside prior to the press conference.

Also, although it is an open weight bout, in the headlining teacher vs. student bout, Hidehiko Yoshida surprisingly came in over 40 pounds heavier than pupil Kazuhiro Nakamura.

"I was surprised because I didn't know that there was that much weight difference," Nakamura said. "But probably my advantage is speed and I would like to use my advantage to fight against him."

Nakamura had previously thought that Yoshida would be coming in at around 105kg. The weight difference had been a tactic all along for the retiring legend, "I have stuffed myself until today so I would like to use my weight to fight against him."

Nakamura, was initially respectful to his mentor but when asked about his true feelings, he continued his trend of wishing Yoshida a brutal retirement.

"Tomorrow, I would like to show my appreciation and respect to Mr. Yoshida in the ring. I have made comments before in my previous fights, that they were kill or be killed. But this time, I only have the determination to kill my opponent."

The sentiment was echoed by Yoshida and there does seem to be no love lost although no eye contact was ever made.

"Finally, the day of my retirement has come. Tomorrow I would like everybody who is watching my fight to be happy and satisfied. I want to be satisfied at the end of the fight. This fight is kill or be killed. I'm going to have to give everything in this fight"