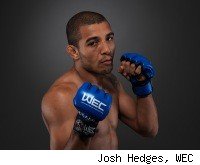 The flavor of the week comes and goes so quickly in the world of MMA that it's hard to remember that less than two years ago, it seemed like Urijah Faber would never lose. In the midst of a 13-fight win streak and with seemingly no credible challengers on the horizon, an endless reign seemed possible for the featherweight superstar.

Fast forward to today, when Faber is a sizeable underdog to the surging phenom Jose Aldo for Saturday's WEC 48.

The fight marks the first time WEC will attempt to sell itself as a pay-per-view attraction, a fact that is possible largely due to Faber's participation in the main event. But will it mark a passing of the torch from Faber to Aldo?

The answer to that will depend on several factors, with perhaps the most important one being the game plan that Faber brings with him to the cage.

Faber has hinted in a few pre-fight interviews that he has questions about Aldo's ground game despite the Brazilian's black belt pedigree. That might suggest that Faber is interested in wielding his wrestling and takedowns as important weapons, which would be significant as he's tended to abandon them in recent fights in favor of a striking-heavy style.

On the other hand, Faber has also said that he believes himself to have an advantage in the standup department, and that he has the power to hurt Aldo, saying he's never really seen the champion's chin tested.

If Faber is open to mixing up his attack and utilizing takedowns, he has a chance to pull the upset and reclaim the championship; if he chooses simply to stand up and trade with Aldo, the chances will diminish greatly.

Why is that? Well, the one clear-cut advantage Faber has in this fight is his wrestling. Aldo did look good defending the takedown in his title win over Mike Brown, but that shouldn't stop Faber from trying to capitalize on an area of strength. Even if he is stuffed, the attempts could have a positive secondary benefit, and that's putting the fight in close range. Faber does some of his best work in tight quarters, particularly using short elbows that comprised much of his attack in his second bout with Brown after breaking his hands.

Conversely, with his wiry frame and fast-twitch speed, Aldo feasts on distance. Especially in space, Aldo is a force to be reckoned with, a mini Anderson Silva with the ability to competently use all the weapons at his disposal, from punches to elbows to knees to kicks. With Aldo, you never quite know where it's coming from, and with his blinding speed and crushing power, that is a problem, because something is always coming.

Another telling thing Faber has recently said is that he believes he has the power to hang with Aldo, but the stats show otherwise. While seven of Faber's 23 wins have come via KO or TKO (and none since Oct. 2006), Aldo has six straight KO/TKO finishes. While Faber's strikes have the ability to stun, Aldo's are much more likely to close the show.

Another interesting element to the mix is Faber's propensity to take risks. He has always been an extremely aggressive, pressing fighter. For a long time, that benefitted him as he continually pressured his opponent, and either they wilted under the strain or it created an opening for him to pounce. I would suggest that he needs to fight a more disciplined pace against Aldo, but it just does not seem to be in his make-up. It is part of who he is, and pulling back on his aggression might actually be more dangerous for him, making him overly defensive.

At any rate, because of Aldo's speed power and accuracy, and Faber's frenetic style, things are bound to get dicey, and quick.

Faber will always be a difficult opponent because of his relentless attack, boundless energy and craftiness. He's going to need all three gifts in perfect harmony to upset Aldo. Even with a partisan Sacramento crowd cheering on Faber, there are too many things working Aldo's way.

Aldo has the advantage in speed and power, his takedown defense is good enough to stay upright for the majority of the fight, and his ground game is stronger than we have seen. His attacks are varied and original, and nearly everything he throws has the ability to be a game-changer. Against almost any other featherweight in the world, Faber would be the more dynamic fighter, but not against Aldo. He is a phenom, a champion at the height of his powers, fluid and technical and otherworldly brilliant. Aldo by third-round TKO.