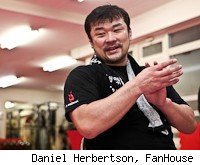 One of the legends of Japanese MMA will step into the ring for the final time on April 25th. At ASTRA Hidehiko Yoshida will say farewell to the MMA world and in his retirement match will face his star pupil, Kazuhiro Nakamura.

Yoshida met with the press at Tsuyoshi Kohsaka's Alliance-Square Gym to discuss his pupil's controversial comments, what he has left to show Nakamura and what the last time in the ring will be like.

Yes. My Body. It is really difficult for me to come to Alliance because everyone forces me to work so hard. My jaw is hurting.

So you and Tsuyoshi Kohsaka are both 40 years old. Training together, how is it?

Difficult. Kohsaka is forcing me to work really hard. I am going to train right up to the fight though. Even the day before the fight. I want to make the most of it. I had a fight on New Years Eve so I am still kind of fit. I was feeling slow in the beginning but I've been focusing on that for the past couple weeks so now I feel ok.

I've been training about two hours a day, six days a week.

What do you have left to teach Nakamura?

It's not something that I want to say to Nakamura but it will be great if I can show him something. My retirement will show it to him. He will take over the leading position in our dojo. We will try to have a good fight and then something will pass on to him.

This fight is for the future.

How do you feel about Nakamura saying that he wants to KO you?

Is he going to punch me? Then we will exchange punches. I am still strong. He has to know that. I am still tough.

Have you visited Yoshida Dojo recently?

No, I often pass by the place but I have not visited since the fight was announced at the press conference.

Compared to the fights in the past, is there anything different?

No, not at all. It is the same as always. It's not like I am going to be sad because this is the last match. Well, I don't have this feeling right now.

What will the ceremony be like after the fight?

I am concentrating on the fight right now. I'll focus on it later.

You haven't trained with the gi?