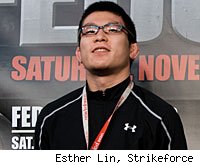 MMA trainer Cesar Gracie said he had an easy decision to make when he first heard that Japan's top lightweight, Shinya Aoki, wanted to train with his squad following a loss to Gilbert Melendez at Strikeforce last weekend.

Gracie, who said Aoki reached out to him via a third party about training at his northern California gym, said he sees it as more than just a chance to help out a colleague. To him, it's a chance to help improve the quality of Japanese MMA in general and pay back a family debt.

"My take on it is, it goes back to the origins of jiu-jitsu and how I got into this art, how my family got into it through the Japanese back in Brazil. I've noticed that Japan is not faring too well lately as a whole in the MMA game," Gracie told MMAFighting.com. "To me it feels almost like a chance to give back a little bit and help the MMA game in Japan. A lot of people are making light of it, how the Japanese have just been getting smashed when they come over here and face American competition. They're a few years behind and I think people realize that. So I said yeah, he should come over and train."

Leading up to the event, Aoki framed his bout with Melendez as a definitive clash to determine whether American or Japanese MMA was superior. The lightweight title fight turned into a one-sided affair, with Melendez battering Aoki on the feet and avoiding his dangerous submissions game on the mat with relative ease.

Gracie said Melendez's performance, as well as the victory by fellow team member and Strikeforce middleweight champ Jake Shields in the main event, convinced Aoki to request some training time after returning home following the event.

"He was very humble in defeat and he was very impressed with Gilbert, with his strategy in the fight, and with our camp in general. You know, we had Shields beat a bigger guy in [Dan] Henderson that same night, so he had commented on how he was impressed with that. When I heard he wanted to come out, I said he's welcome to come out here. I think he'd have a good time training and he could bring that knowledge back to Japan."

Of course, big wins on the night weren't all the Gracie team made headlines for in Nashville. They also played a pivotal role in the brawl that closed out the CBS broadcast following the main event, as Shields and Melendez joined Strikeforce welterweight champ Nick Diaz and UFC fighter Nathan Diaz in a chaotic fracas involving Jason "Mayhem" Miller during a post-fight interview.

Gracie said there won't be any formal sanctions from Strikeforce or from the UFC, though he did acknowledge that UFC president Dana White called Nathan Diaz to express his displeasure with the fighter's involvement.

As for the repercussions from the Tennessee Athletic Commission, however, that might be a different story.

"We're expecting for there to be something from them next week and right now we're all sort of waiting to see what that's going to be," said Gracie. "It could be a bit Draconian, or it could be a slap on the wrist. We don't know. We're kind of holding our breath a little bit."

One of the issues that concerns Gracie is how potential sanctions might affect Nick Diaz's scheduled bout with Hayato Sakurai at Dream.14 on May 29. The event will take place in Japan, far out of the jurisdiction of the Tennessee commission, but American regulatory bodies haven't always reacted kindly to fighters who take bouts overseas while under suspension in the U.S.

Gracie said it's still unclear whether a suspension in Tennessee, should one be forthcoming, would stop Diaz from fighting in Japan in May.

"It's an interesting question. In the past, when certain athletic commissions would suspend you, like Nevada or California, they'd say, 'Well, we don't want to see him fighting overseas either. We're going to keep an eye on that.' And if you did fight overseas they'd come down on you and extend your suspension or something. But a lot of people started testing that, like Vitor Belfort, who tested positive at one of the Pride shows, and Josh Barnett, who tested positive with Affliction, and they went overseas and nothing much happened.

"With Nick's fight, it's something we've thought about a little bit, but I don't think it will affect him."