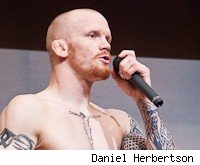 Three Featherweight fights were announced Friday for FEG's DREAM.14 to be held on May 29th at Saitama Super Arena.

In addition to the previously announced Hayato "Mach" Sakurai vs. Nick Diaz bout, 2009 DREAM Featherweight GP finalist, Hiroyuki Takaya, will look to rebound from a first-round KO loss to Michihiro Omigawa at Dynamite!! 2009 when he faces Joachim Hansen in the Norwegian's second fight at Featherweight.


Akiyo "Wicky" Nishiura will return to the ring after a stint training in America with Matt Hume to face 2009 Featherweight GP semifinalist Hideo Tokoro and Kazuyuki Miyata wants to continue his unbeaten run in 2009 when he faces reigning DEEP Champion, Takafumi Otsuka.

In addition to the announced fights, with his one night tournament win at DEEP 47, Yoshiyuki Nakanishi won himself a spot in DREAM's Light-Heavyweight Tournament. Christian M'Pumbu was rumored to be already signed to compete in DREAM's Grand Prix but Nakanishi bested the Frenchman and it is not yet known if this loss has cost him his place.

DREAM 14 was originally set to be held in April in Seoul, South Korea but was rescheduled back in Japan after the promotion failed to secure a TV deal locally.
DREAM 14 - May 29th at Saitama Super Arena: