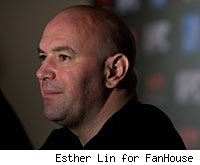 For the WEC's first foray into pay-per-view, the lines have blurred more than ever between the WEC and the UFC. Until now, both Zuffa-owned companies for the most part have been presented separately, with everything from different ring girls, different broadcasters and its own head figure. But for Saturday's WEC 48 event, it'll seem more like a typical UFC event, only with WEC fighters.

The constant with the two brands is when it comes to pay-per-view, UFC president Dana White explained during Thursday's WEC 48 press conference.

White has been the one leading the media conferences promoting this event instead of WEC general manager Reed Harris. Also missing from this pay-per-view will be the familiar faces and sounds of ring announcer Joe Martinez and broadcast team members Todd Harris and Stephan Bonnar. The regular WEC team will be back when the WEC returns to Versus on June 20 in Edmonton, Canada.

With the WEC being the far less established brand of the two, there's been questions on whether the pay-per-view cost should have been priced lower than the usual UFC price of $44.95. White argues that he is offering the same quality of fights.

"This is what these guys deserve. This is not a smaller event," White said. "The WEC is not the little brother of the UFC. These guys are the best in their weight classes and you're looking at the best fighters in the world."

Unlike previous WEC events, this one will be made available in stores, both on Blu-ray and DVD on July 20.