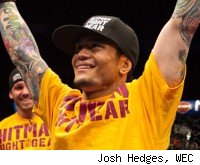 The task of setting the tone for the first-ever WEC pay-per-view this weekend falls on the shoulders of Scott Jorgensen and Antonio Banuelos in a rematch from WEC 41 last June.

While Jorgensen lost a short decision in the fight, he's arguably become the bigger prospect of the two when it comes to making a mark in the WEC's bantamweight title scene.

In this exclusive interview with MMAFighting.com, Jorgensen talks about wanting to avenge the loss and the importance of helping kick off the WEC 48 pay-per-view with a bang.

Ray Hui: You felt you should have gotten the nod the first time around. Now that you got the rematch you wanted, do you feel the need to finish him convincingly so there's no need to leave it to the judges?
Scott Jorgensen: I need to finish him. I want to finish him. I want to put on an exciting fight and end it in dramatic fashion, but I think from bell-to-bell if I can get this thing going and dominate like I should -- It doesn't matter if it goes to the judges, it's going to be a clear-cut decision for me and it's not going to be a close fight this time.

You won over a lot of fans because of that fight. Despite the loss, do you think that was the fight helped spotlighted you from the pack, or would you pick another?
I'd say the Banuelos fight was definitely important and it definitely helped me turn this corner to get to the path where I'm on, but at the same time the Mizugaki fight had more power, just because I completely dominated him from start to finish, and I sent a message to the rest of the division and world that I'm here and I'm not going to let anyone stop me. You better start bringing in the top guys in the division to slow me down, because I'm coming.

How are you approaching this rematch? How much do you think has changed in a year?
I don't know how much has changed for him. He's fought one time and hasn't been really that active. Me on the other hand. I know I've changed. I know I'm a different fighter. I've had three fights. Things have been different. I'm on a roll. I feel good.

What has changed for you specifically?
In the last five months now, I've been training all my stand up with Kit Cope. He's in Boise and he's my stand up coach. That's changed dramatically. People haven't gotten a chance to see my new stand up yet because my last fight was 31 seconds. I changed my overall outlook of the game. Tweaked some things in my standup, on the ground, been wrestling a lot and I think it's all coming together.

In addition to Cope, who are you training with for this fight?
Jesse Brock, Joe Warren, all my team back at Twisted Genetiks.

In the past, you've made the rounds from gym to gym. This is your main affiliation now?
I started my fight gym Combat Fitness and my team Twisted Genetiks. I traveled in the past just because I didn't know much and I wanted to be thrown in the middle of everything and learning as much as I possibly could. But now that I got my feet under me and I'm hitting the ground running, I'm more comfortable being at home and training.

Have you seen that Dan Miller guillotine in the IFL where he stretches his opponent's neck almost to his chest?
I haven't seen it.

I'm bringing that up because your last guillotine was pretty nasty too, where you pretty much raise him off his feet.
It's just a choke that I practice all the time that I can hit on pretty much anybody and I caught Chad in it. I had Mizugaki in it and after that I played with it a little bit to see what went wrong. And this time I made the proper adjustment and just finished him. I didn't know his feet was off the ground and all that fun stuff. (Laughs.) But it was definitely one of my more memorable submissions.

Your last fight with Banuelos was considered a fight of the year candidate, do you see it as a compliment that the WEC chose you two the set the tone on their first PPV?
Oh yeah, definitely. We set the tone for the pay-per-view for a lot of people who haven't seen the WEC and the fact that this is the first time we're on pay-per-view. It's great to kick off the bantamweight in such a grand fashion with Buffer, Joe Rogan and Goldberg doing the commentary. It's definitely going to be something I'm proud of.