Kazuhiro Nakamura: Stepping Out From Shadows 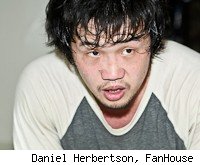 This Saturday, April 25th at ASTRA, Kazuhiro Nakamura will step into the ring to face his friend and mentor, Hidehiko Yoshida. It is Yoshida's last fight and Nakamura wants to finish him.

In this exclusive interview, Nakamura spoke to MMAFighting.com about spending his career fighting in Yoshida's shadow and explains why it should be the student to finish of the teacher.

Daniel Herbertson: What was your first reaction to hearing that your opponent will be Yoshida?

Kazuhiro Nakamura: I heard about the match a day before the press conference. I really had mixed feelings. But, I'd been thinking, if Yoshida is going to fight someone at the very end of his career then it should be me. I thought, "Finally. It came". But was not a clear feeling. It was a quite bizarre and cloudy thing in my heart.

Tell me about your relationship with Yoshida prior to this fight. How long have you known each other and how close were you too?

We've known each other about a decade. When I was in the 9th grade the Barcelona Olympics was being held and I saw him win the gold medal. He is someone that I have looked up to ever since.

It's really not something I can describe but our relationship is that he is my mentor and I am the student. He is like my big brother. He is someone I really admire and set my aim at.

What was your first conversation like with Yoshida after you learned about the fight?

You don't want to speak to him?

I've already identified Yoshida as my enemy and so I have decided to seperate myself from him. This is my personality. Once the match has been set, I cannot talk to him lightly or have a conversation with him as a friend. I need a line between myself and him.

You know more about Yoshida's game than anyone. What are his weaknesses?

He is 40 years old and he has so many injuries. Of course these kind of things will be his weak point but he does have technique. I've been watching his techniques for many years though in the dojo. This knowledge will be an advantage for me. Yoshida has a heavy punch but it's kind of slow. On the ground, he will be dangerous in the mount position.

I am faster and I have more experience.

In your meeting with the press this week you declared that you want a KO over a submission. Why?

I did declare that I wanted a KO over a submission but either is OK I suppose.

Takahiro Kokuho (ASTRA Producer and both Nakamura's and Yoshida's manager) also said that he wants you to finish Yoshida so that you can take over the leading position in Japanese MMA. Do you feel like that if you do finish Yoshida, that you gain this position?

I can not exactly copy what Yoshida has done in his career because the time is different. When he was fighting in his prime, there was PRIDE. It was really huge so his influence was huge. Right now, MMA in Japan is in a difficult situation so what I have to do is rebuild from the base. With my fighting in the ring, I would like all of the people at Yoshida Dojo to learn something from me.

How is MMA in Japan in a difficult position and how can you help?

Yoshida Dojo there are so many fighters that cannot support themselves only with their fighting. They need to work after training. So what I am doing to help is to hire fighters to work in my restaurant. I would like to help develop fighters and give them the same opportunities that I have and make it easier for them to fight.

At the moment, it is really difficult for MMA events to get a TV deal in Japan. With no disrespect to Mr. Kokuho, there are too many events. The organizers of these events are leading but they are not leading the sport, mixed martial arts. There needs to be a system for fighters to be developed and grow and there needs to be a commission like in Judo, to make this into a more legitimate sport.

How was your time in the UFC and what was that experience like contrasted with Japan?

When I was fighting in PRIDE, I thought that it was the number one organisation in the world. When I went to the UFC, I was fully confident of myself. But the situation there was different. When I was in PRIDE I thought that I really would be the champion but PRIDE folded and I made the transition to the UFC. There was so many better fighters there. I thought, "I really need to take this seriously or I'll be left behind". I'm considering whether I should go back to the middleweight after this fight. I felt too small in the UFC though. I have a feeling that I want to try in the UFC at middleweight.

What do you have left to learn from Yoshida?

It will probably be something that I have to think about after the fight. Before Yoshida fights, there are so many people contacting him and supporting him. He is very influential. When Yoshida retires I will be leading Yoshida Dojo. I think I need to learn how to be influential and how to be the leader.

So it was quite a long time ago but about 8 or 9 years ago when Yoshida founded this Dojo, I was the first student. I had the same background as him, judo. Yoshida had his first MMA fight in Dynamite against Royce Gracie. It was really a great event in Japan. Even the newspapers had articles about him, not the sports section but the actual main newspaper.

Shortly after that, I debuted in PRIDE. And as Yoshida was my mentor, I drew a lot of attention. Even more than anyone expected. Because of this, I have always been fighting with a lot of pressure from others. People saying, "You have to go beyond, Yoshida someday". I have been fighting against this pressure for the past seven or eight years. But I have confidence that my career in mixed martial arts is better than Yoshida's because I have fought against some great guys as well.

When I heard about Yoshida's plan to have a retirement match against [Satoshi] Ishii at Dynamite, I was really... not depressed but I had mixed feelings. "Yoshida will be fighting Ishii in his last match... OK.", I thought. But compared to Ishii, of course I have had a longer MMA career and have fought against these great guys. I thought "Why is it Ishii-kun?" But now, this last chance showed up and I thought, "Finally, the time has come". I thought that this this would be the last chance to show what pressure I have been fighting against all this time in the ring. This is a mentor and student fight but we have to overcome that because it is so much more.

You have said that you will be fighting without a corner. Why is that?

This dojo is like a family. We are all really close to each other. I don't want to distrub the relationships here. I don't want someone supporting me to disturb their relationship with Yoshida or the rest of the dojo.

After the fight, when you and Yoshida first get the opportunity to talk, what will you say to him?

What will Yoshida say when he hears what you have been saying in the lead up to this fight?

I would want it to be a difficult match that I cannot win.

It is really understandable that people in the West cannot understand this fight seeing as though we are teacher/student and from the same gym. This is really self-centered, but I have confidence that I have the deepest relationship with Yoshida out of all people in MMA. When people watch the fight, this relationship will become evident. I want people to know what kind of relationship we have and how special it is.