Will Zuffa's WEC Gamble Pay Off This Weekend? 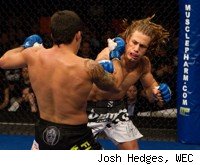 It's not easy to get people to pay for something that used to be free. Ask any airline that recently started charging for checked luggage – it's the kind of thing that brings out the angry mob in consumers who already feel like they're one more fee or rate hike away from reaching for the torches and pitchforks.

But risks be damned, this Saturday UFC president Dana White is going to give it a shot with the first ever WEC pay-per-view event. After airing regularly on Versus (and yes, I know cable isn't free, but you're going to pay for it anyway because you'd rather die than miss an episode of Cats 101 on Animal Planet) for the last three years, now Zuffa wants you to pay for the privilege of seeing their little guys duke it out.

This is more or less the company line at Zuffa, the parent company of both the UFC and WEC, when it comes to pay-per-views. It's the reasoning White uses whenever anyone asks why a particular card is worth $44.95. It's worth it because you're a fight fan and you'd hate yourself for missing it. End of discussion.

This is identity politics, only with money instead of votes. You'll pay because of the person you are, and the way we know you are that person is because you'll pay.

Of course, it still doesn't explain why this specific card – WEC 48, headlined by the legitimately intriguing featherweight title bout between Jose Aldo and Urijah Faber – is worth paying UFC prices for when previous installments weren't. It's got a great title fight, but so have plenty of the WEC events that aired on Versus. It's also got Ben Henderson taking on Donald Cerrone, which we saw once already. It was an outstanding fight. It was also free.

Assuming your insatiable need to identify yourself as a fight fan doesn't convince you to part with your money, what's part two of this sales pitch? And what happens if not enough people pony up the dough?

These are questions that the non-independently wealthy among us are likely asking heading into this weekend. White won't say exactly how many pay-per-view buys the event needs in order to be considered a success, though he did say that it would be "terrible" if Aldo and Faber didn't at least double the numbers from the Roy Jones Jr.-Bernard Hopkins fight (which pay-per-view whisperer Dave Meltzer estimates did around 90,000 buys).

White also says that this isn't an experiment, but rather a "long-term strategy." Then again, he admits that "if we put on this event and we lose money, yeah, we're going to be a little deterred" when it comes to planning future shows.

In other words, he isn't saying that he's taking a wait-and-see approach to the WEC's grand pay-per-view plan, but he is going to wait for the numbers and then see when/if he wants to do it again.

The best thing to come out of this costly new development is that WEC fighters (at least the ones on this card) will finally see a sorely needed and undoubtedly earned pay increase. That's the kind of news fans like to hear, until they stop and realize that it's their own money that is driving the salary bump. Then it becomes like the pay for teachers and police officers – in theory we'd all like to see it go up, but we're not all that excited about paying the extra taxes to make it happen.

For hardcore fight fans, WEC 48 marks the second time this month they're being asked to cough up forty-five bucks to feed their vice. When you factor in last weekend's Strikeforce event (and say what you will about it, at least it was free), it's the third Saturday in a row where MMA has penciled itself into the social calendars of its fans.

White says you can never have too much MMA when there are great fights on the docket. But how much money can fans spend on it per year before they start to feel like it would be cheaper to develop a heroin habit instead? And how many consecutive Saturday nights are they willing to spend on the couch, surrounded only by the other serious fight fans in their lives, and perhaps a supportive but increasingly annoyed girlfriend or two?

The truth is, we don't know the answers to these questions yet. Neither does White. There's only one sure way to find out, and the knowledge isn't free. Someone is going to wake up with a lighter wallet on Sunday morning. Whether it's Zuffa or MMA fans, we'll know soon enough.