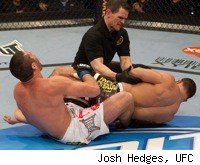 When Rousimar Palhares appeared to have held on to a heel-hook against Tomasz Drwal at UFC 111 a little too long, a lot of MMA fans and critics hailed his actions as being dirty and irresponsible.

MMA Fighting spoke to Drwal via e-mail about the incident recently, and he wasn't as quick to criticize Palhares.

"Sh** happens to everyone, and it's part of my job to deal with accidents," he wrote. "I'm not going to complain. This time around was good for him and bad for me. I think I was under an overall dark cloud anyway because I also lost my wallet with important documents while in Newark. So I am really looking forward to better days."

Asked whether he thought Palhares' actions were dirty, Drwal offered this explanation:

"I felt a slow and weird crack in my ankle, so I tapped and screamed. I think when someone taps and screams it means that he's done, that he concedes the win to the other guy and that the guy should stop the hold without fearing any misunderstandings with the ref. But truthfully, I have no idea what went though his head. I will not judge him and simply leave it to the fans to make up their own mind."

Drwal also said that he will not need to undergo surgery or extensive rehab due to Palhares holding onto the submission too long.

"[My] knee and ankle does not need surgery and it was just a strong stretch. I do have fluids in my knee and my ankle creating some swelling but it's getting better everyday. I think I'll be able to come back to 100% and be able to train in two weeks time."

Palhares was suspended 90 days by the New Jersey State Athletic Control Board for his actions, but he told MMA Junkie recently that he thought the suspension was unjust.

"I did not think the suspension was fair," Palhares said. "I did not have any intent of hurting Drwal. It was in the heat of battle, and I wanted to make sure I did not lose the position.

"I was just waiting for the ref to interrupt the match."

As for Drwal's next fight, he said he hopes to fight again sooner rather than later to erase the memory of the loss.

"As quickly as possible I hope. I really want to turn the page on that unfortunate ordeal. Once I'm good to go, I hope to receive my next assignment from the UFC."