Chris Lytle vs. Matt Brown in Works for UFC 116 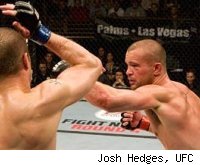 UFC 116 is likely to be the MMA event of the year for the titanic heavyweight championship main event alone, but the developing card looks quite intriguing as well.

The undercard will get a strong boost from a matchup pitting two of the UFC's most exciting welterweights, as a source close to the event tells MMA Fighting that a Chris Lytle vs. Matt Brown pairing is likely for the event.

The fight would be a rematch of an August 2007 bout in the short-lived United Fight League. At the time, Lytle was under UFC contract but the Indiana native was given permission to fight for the local promotion. Lytle won by second-round submission.

The 35-year-old Lytle has consistently been one of the most entertaining performers in MMA, winning nightly awards in six of his last seven UFC bouts, including "Submission of the Night" for his most recent victory at UFC 110, a kneebar that he used to finish Brian Foster.

Brown has also won three of his last four, but is coming off a rear naked choke loss to Ricardo Almeida at last month's UFC 111.

Other rumored bouts include Wanderlei Silva vs. Yoshihiro Akiyama, Kurt Pellegrino vs. George Sotiropoulos, and Stephan Bonnar vs. Krzysztof Soszynski in a rematch of their controversial UFC 110 bout, though several more matches will be added to the card in the coming weeks.

The event takes place at the MGM Grand Garden Arena in Las Vegas.