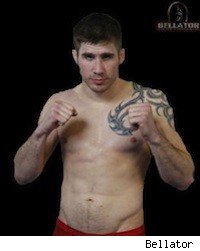 If you were surprised to hear that the volcanic ash cloud that's been disrupting air travel across northern Europe had forced "Judo" Jim Wallhead to miss his first Bellator tournament bout this week, imagine how Ryan Thomas felt. He's the welterweight who got the call to replace Wallhead at Bellator 15, and it was the first he'd heard of the ash cloud or the volcanic eruption in Iceland.

Not surprisingly, the whole thing sounded a bit far-fetched to him at first.

"The first thing I thought when my trainer called and said I was getting back into the tournament because of a volcano, I thought he was messing with me," said Thomas (10-4). "I had no idea there was even a volcano that erupted."

The eruption of Eyjafjallajökull (have fun trying to sound that one out) and the ensuing cloud of ash first started making headlines last week, but you'll have to forgive Thomas for not noticing. He had a fight against former Olympic wrestler Ben Askren to prepare for on Thursday, so he wasn't exactly sitting around watching CNN.

The fight ended in disappointing and somewhat controversial fashion for Thomas. Locked in a guillotine choke early in the first round, he refused to submit but had the decision taken out of his hands when the referee stopped the bout and declared it a technical submission. Thomas protested the stoppage vehemently and insisted afterwards that he was in no danger of losing consciousness, but the ref's decision stood.

After a night like that, seismic events on the other side of the Atlantic were the least of his concerns.

Then on Sunday he got a phone call from his trainer telling him that Wallhead couldn't make it to the U.S. due to flight restrictions resulting from the ash cloud, and Bellator CEO Bjorn Rebney intended to make good on his promise to give the first available alternate spot to Thomas as a way of compensating for the controversial stoppage.

"He calls and tells me there was a volcano and there's smoke and I'm back in the tournament because someone from England can't get over here. I really thought he was pulling my leg. But once I figured out he was for real I was very, very excited. I kind of feel like everything happened for a reason and it's sort of a blessing in disguise."

The trouble is, by the time Thomas found out he'd be getting a second chance in the Bellator tournament, he was already three days removed from his first fight. Because of the nature of the loss, he admits that he spent much of that time drowning his sorrows.

"I was kind of bummed out about the outcome of the fight, getting screwed over, so I kind of pigged out on some ice cream," said Thomas. "But Sunday is when I was told I was that I might be back in. So I was back in the gym on Sunday and started watching my diet real well. I just got to Connecticut today and I was 176, so I didn't do too much damage. That's lower than my weight was at this point out from the Askren fight. I don't know how that worked out, but I'm glad it did."

This Thursday night, for the second time in the span of a week, Thomas will fight in a Bellator welterweight tournament quarterfinal bout, this time against Arizona Combat Sports fighter Jacob McClintock (6-0). It's the kind of fight that would be tough to prepare for with two months' notice, much less five days.

But if Thomas needs any extra motivation to win this one, all he has to do is remind himself that a victory over McClintock means he advances to the semifinals. Depending on how the brackets shape up, he just might get the chance to pick up where he left off against Askren. And all because of a volcano he can't pronounce, and an ash cloud he didn't know existed.