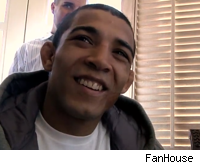 Like other Brazilian sports stars, Jose Aldo deserves to go by one name. His talents are singular; his name should be, too.

Instead, it is his WEC 48 opponent that is so easily recognizable. In the world of MMA, there is only one Urijah. Yet while Aldo is the champion, it is Urijah Faber that will have the hometown crowd in his favor when the two do battle in the WEC's first-ever pay-per-view, which airs this Saturday from Sacramento's Arco Arena.

If you've never seen Aldo fight before, it might be against your better judgment to spend $45 to do so for the first time. That is what the WEC is asking you to do, and in today's economy, that's real money that can probably be put to more practical use. No one knows that like Aldo, who grew up poor enough that he didn't always know when he'd eat his next meal, and that his simple dream for the future was to own a condo. Neither of those is an issue anymore for the WEC featherweight champion, but he still understands the value of money, and promises to deliver a performance to match the event's price tag.

"I fight for my fans," Aldo told MMA Fighting. "I love putting on a good show for them, and I feel that they enjoy a good stand-up game. I am very excited to be headlining the first-ever WEC pay per view, and I can guarantee it will be a great fight."

If he follows the pattern set in his previous WEC bouts, no one will turn off the TV upset with their purchase. Aldo (16-1) is 6-0 with six technical knockouts while with the promotion, including three "Knockout of the Night" awards. He won four times in 2009 and was named "Fighter of the Year" by several MMA websites and publications, punctuating his year by dominating Mike Brown en route to his championship.

Now comes a differnent kind of test, a move into hostile territory against the former champion. It's a fight that Aldo says he knew one day would come.

"Urijah was the champion and has been a top fighter for some time," he said. "I knew that I would one day be facing him in the WEC."

Some are viewing the match as a potential passing of the torch. Faber has been with the WEC for years and continues to be its biggest name. In fact, this event would not have been on pay-per-view without Faber as a participant. While the 30-year-old Faber remains very much relevant in the fight game, the 23-year-old Aldo represents the future.

That, however, is something Aldo doesn't think about. Neither is he concerned about fighting in Sacramento.

"I clear my mind, I don't think about the pressure before a fight, I focus on going in the cage and being successful while doing my job," he said. "When I first fought in the U.S., the size of the crowd was something I was not used to seeing, but you get used to it."

Aldo's already authored two of his most important moments at Arco, winning his WEC debut there against Alexandre Nogueira in June 2008, and one year later memorably knocking out Cub Swanson with an infamous flying double knee in just eight seconds. It was that knockout that really started the buzz of Aldo as a superstar in MMA, and he proved it was no fluke when he topped Brown for the belt.

But what makes Aldo so special? Few featherweights carry true knockout power. Few fighters boast graceful striking while holding Brazilian jiu-jitsu black belts. And few get to a major title at such a young age. He also has a little showmanship in him, too. After knocking out Rolando Perez in 2008, he ran out of the cage and into the crowd to celebrate with the fans. ("I don't think the athletic commission liked it as much as I think the fans did," he said.)

Aldo is remarkable for his combination of maturity, skills and focus. Unlike many young athletes who enjoy the nightlife and attention their celebrity commands, Aldo spends most of his free time at home, making sure his body is rested for the next day's work.

The world's taken notice. Despite Faber's bigger name, Aldo is considered a huge favorite in the bout.

Faber, who returned from a seven-month layoff due to hand injuries to defeat Raphael Assuncao and move into the top contender spot, is in something of a must-win situation, because if he doesn't beat Aldo, it may be a long time until he builds his way back to another crack at the belt.

A former collegiate wrestler at California-Davis, Faber has over time evovled into a largely standup-based fighter, but recently has hinted that he might return to his roots with suggestions that he believes there to be holes in Aldo's ground game.

Aldo is unbothered. He knows where he wants to fight, but he also knows the final result is most important as winning and entertaining.

"I like to stay on my feet and exchange," he said. "I don't know where the fight will take us, but I am confident that my game plan will bring me a great victory and allow me to keep my belt. It has been my dream to be the champion and I won't let that dream be taken away from me."