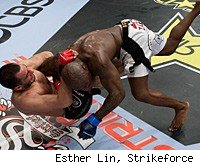 The last few times I've posted my rankings of the Top 10 light heavyweights in mixed martial arts, I've heard from readers who insisted that I had Gegard Mousasi too low. It turns out I was ranking Mousasi too high, and not giving enough credit to the man who thoroughly whipped him on Saturday night, Muhammed "King Mo" Lawal.

Like most MMA fans, I questioned whether Lawal was ready for a fighter of Mousasi's considerable talents. But in reality Lawal showed that he has incredible strength and great takedowns, and he makes my list of the sport's best light heavyweights, which is below.
(Editor's note: The individual fighter's ranking the last time we did light heavyweights are in parentheses).

Top 10 Light Heavyweights in MMA
1. Lyoto Machida (1): He'll rematch Shogun Rua in what should be the marquee MMA fight for a stacked month of May.

2. Anderson Silva (2): The UFC's middleweight champion is good enough that he could challenge for the light heavyweight title, but for now he's sticking at middleweight to defend his belt against Chael Sonnen.

3. Shogun Rua (3): Many fans thought he deserved to win the decision when he fought Machida in October. I think Rua is going to need to take it out of the judges' hands if he's going to take the belt when they fight again.

4. Rashad Evans (4): If he can get past Rampage Jackson, he may get another shot at the light heavyweight title late this year.

5. Jon Jones (5): The UFC's single biggest matchmaking question right now is what to do next with Jones. He's good enough to beat anyone in the light heavyweight division, but young enough that the UFC wants to bring him along slowly. Joe Silva needs to work his magic and get Jones in the Octagon with someone who can challenge him, which Brandon Vera and Matt Hamill failed to do.

6. Forrest Griffin (6): In addition to hearing that I've underrated Mousasi, I often hear that I've overrated Griffin. I know he looked bad against Silva, but I don't buy that: This is a guy whose last five opponents were Shogun, Rampage, Evans, Silva and Tito Ortiz. There's no shame in going 3-2 against that quality of opposition.

7. Rampage Jackson (7): At his peak he was one of the best in the world, but I suspect he's going to look rusty when he finally returns to the Octagon to fight Evans.

8. Muhammed Lawal (NR): It will be interesting to see what happens next for Lawal. Having beaten Mousasi he's now in a position where Strikeforce can't offer him much of a challenge at 205 pounds. He might enter Dream's light heavyweight tournament, or he might even fight at heavyweight next time around.

9. Thiago Silva (10): He was supposed to fight Ryan Bader in what would have been a great bout at UFC 116, but that fight may be called off because of a Bader injury.

10. Antonio Rogerio Nogueira (NR): His upcoming fight with Griffin should be a fun one, and if he wins he'd have a good case that he deserves a shot at the title. It's too bad he doesn't want to fight his buddies Anderson Silva and Lyoto Machida.