Henderson, Cerrone Would Be Excited to Test Themselves in UFC 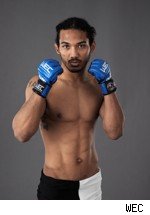 Although there is no time frame for it, it's a possibility that the members of the WEC's lightweight roster could find themselves in the UFC.

"I think eventually what we do is, we're going to continue to add to lighter weights, and you'll end up seeing these (WEC) guys go into the UFC, the 155 pounders," UFC president Dana White said Monday in an interview with Sergio Non of USA TODAY.

It's likely that a move is very far down the line as the UFC has yet to even implement the long talked about 125-pound division. But if the merge were to happen today, the two big moves would be the champion Ben Henderson and current No. 1 contender Donald Cerrone.

On Tuesday's WEC 48 conference call, MMAFighting.com asked the promotion's top two lightweights to share their thoughts on a potential move to the UFC.

-- "I'm comfortable with where it is right now, but if it does plan on going to the UFC and merge one day," Cerrone said. "Awesome ... It would be a dream to fight the BJ Penns, the Frankie Edgars, and the Joe Daddys out there so, all to be under one big family would be great. Fighting for the WEC I love, fighting for the UFC I'd love even more, so it'd be a great honor for us all to be on the same level, I think."

-- "Fighting for the WEC, fighting for the UFC, both owned by Zuffa," Henderson said. "They do a great job and they treat you well, with respect. None of the horror stories you hear from Strikeforce: Guys walking into the lobby and Strikeforce employees (are) there and not shaking their hands, not meeting them. Zuffa is way different. (They) take care of their fighters. If it did happen, if it did go through, I would love to test myself against some of those guys. I am all for it 100%. I want to be the best in the planet and to do that I have to fight the best on the planet."