Enson Inoue: The Freedom to Fight, Risk Life in Ring 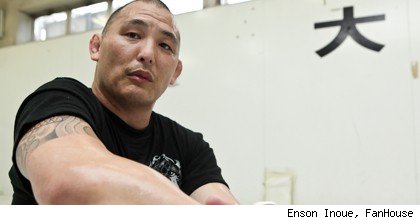 After a six-year absence, Japanese MMA staple Enson Inoue will return to the ring this Saturday, April 25 at ASTRA in support of Hidehiko Yoshida's farewell in Tokyo, Japan.

Inoue, who recently turned 43, spoke to MMAFighting.com about growing older, his prison sentence and bringing his never-say-die attitude back into the MMA sphere.

Ray Hui: The news of you returning came out of the blue. How did this come about?
Enson inoue: I've been wanting to come back to thank the fans for helping me stay in Japan and I got a good offer. I was just planning to get in to thank the fans for (their support) -- they sent in over 9,000 petitions to keep me in Japan when I was having my problems with immigration. And out of appreciation for that, instead of saying thank you, they keep saying they want to see my spirit in the ring again, and I figured there's no better way to pay them back than to get in there one more time.

One more time? Does that mean this one will be your last?
Well, you never know. I'm going to take it one (fight) at a time. 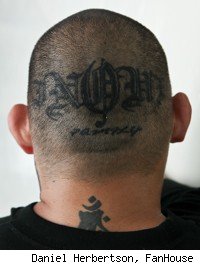 You've been through a lot the last six years. What's your life been like away from the competitive side of the sport?
The last two years have been like the crossroads of my life, where I went through a lot. I went to jail. For a year, I had immigration problems that they were going to deport me out of Japan. Lot of important people close to me passed away. My dog passed away. All in all, this has been turning out good for me. It made me stronger. It made me appreciate life a lot more.

How did your imprisonment make you stronger?
You know when you go to prison, everything's taken away from you. Your freedom, your time, what you want to eat, what time you sleep, what time you wake up, what time you brush your teeth, what time you take a bath. When you're in the outside world, you can make all the choices in your life, but -- you're grumbling about your job, you're grumbling about your car broke down, you're grumbling about having to pay the electric bill. You realize that those aren't the things to grumble about. You think rain is the worse thing in the world, but you can't even feel the rain on your face when you're inside. The only time you can feel is during exercise time when there's a little screen and you can feel the rain come down and we actually stand in the rain and feel the rain -- it's something (in the past) that I'd run to the car not wanting to get hit by the rain. The appreciation level changes just changes for whatever you feel and experience in life. It's made my whole life, overall, much more happy. I appreciate a lot more of the simple things.

Marijuana possession is a huge deal in Japan, but you can say not so much in the US. Do you think sentences are too harsh in Japan?
It's their own opinion for every country for how bad marijuana should be. In Amsterdam, it's okay. In the States, it's getting a lot more lenient. In a place like Japan it's really strict. But in a place like Indonesia or China, it's even worse. So I could have gotten the death sentence or years in prison if I was in China. I don't think it's a good or a bad thing. I just think -- I knew the law when I approached the problem. I knew what I was doing when I possessed the marijuana so, I have no complaints. I think it's a little strict. I don't think marijuana is that bad of a drug. I don't think you can call it a drug because it grows naturally. I think it's worse that alcohol, but it's the law and you gotta go with the law.
Dying in the ring -- It actually got a lot easier for me.
-- Enson Inoue
A drug offense can destroy a public personality's career in Japan. You appear to have escaped from the offense for the most part, unscathed?
Yeah, I guess I'm lucky. I wasn't like a (Kazushi) Sakuraba, where I had the reputation of being a very good guy and a perfect role model citizen. I was always on the dark side and everyone always thought, "Enson's a gangster, Enson's a Yakuza ..." So it didn't really damage me that much. It's actually helped me in a lot of ways. These two years have past and my reputation hasn't been affected at all. Maybe in the beginning.
You reputation in MMA has been about putting your life on the line when you fight. As you grow older, encountering more family, relationships, opening gyms, and appreciating life more, is there a part of you think MMA is more of a sport now and you don't have to be in a fight with the mindset of being willing to die?
It's not even a choice for me. It's just a mindset that I go into instinctively. And as far as I'm concerned, the further down in life I get, the more I know about the goods and the bads, the backstabbers, the crazy stuff in the world that happens, dying in the ring -- it actually got a lot easier for me.

Really?
Yeah, before when I was young, I had all these (goals). Yeah, I wanted to get married, I wanted to do this, I wanted kids, I wanted to see this, I wanted to see that ... But I've been married, I don't think I want kids ... I've seen a lot. I've seen also a lot of the bad stuff and as much of the good stuff you're going to leave, there's a lot of bad stuff you're going to leave too, so it's not a big deal, for me.
You've been interested in an autobiography. How would you describe your current chapter in your life?
This sudden return to the ring will definitely be a chapter in the book. The insecurities I'm having in training. The insecurities that I will be having in the ring. It will be a different approach because I only have five weeks, not -- like I usually take three months. It's a bit different. I guess I'm a little older and I'll be six years out of the ring. It's a whole new challenge for me. 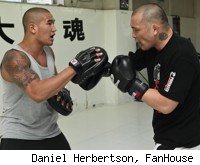 You had a big hand in helping Norifumi "KID" Yamamoto (also Enson's former brother-in-law) get his start in MMA and he was a prized member of your team until you two had a falling out. Do you still keep in touch with him? What do you think he needs to do to get back on track?
I don't keep in touch with him much anymore. He calls me every once in awhile just to say hi. We're not really associated professionally or as fighters. As far as him getting on track again, he needs to -- there's a bit of confidence that went away when he started to getting knocked out. He's the typical fighter that if he fights with confidence, he's unbeatable. I think he's wavering in that right now. He needs to find a way to get his confidence back. That's the most important thing he needs to do right now.
You'll be facing kickboxer Antz Nansen. What are your thoughts on him as your return opponent?
He's a solid puncher. Young, aggressive, very exciting fighter. Just the kind of guy I want to fight. I don't want to fight a guy that will only protect and survive. He's the type of guy that will go for the KO, go for the finish. He's not a type of guy who just wants to take the win. He wants to actually knock the guy out. I know his coach really well. I heard they accepted the fight before I did, so I figured, if they're accepting the fight, it's OK. In truth, he's the type of fighter I want to fight in my comeback. I wanted someone to come and get me. Perfect.
We see that time can pass a fighter even when he's actively competing. How's your body holding up and what are you doing to be able to get in there and stay competitive?
Just training as hard as I can. Getting the cardio in as much as I can. Working to my strengths. Basically, six years out of the ring, I'm going to be 43 at the time I fight. People ask me, will there be ring rust? I'll let you know on the 26th after the fight is done. (Laughs.)