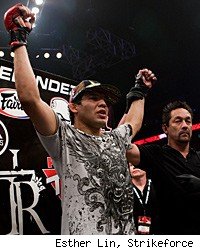 The UFC lightweight championship has changed hands and the Strikeforce champion has beaten the Dream champion since we last ranked the MMA lightweights, but that has muddied the top of the rankings more than it has clarified things.

For starters, there's the issue of Frankie Edgar beating B.J. Penn: I now consider Edgar the best lightweight in the world, but at the same time I suspect that they'll have a rematch this year, and that Penn will win. So I'm not real confident in my top choice.

And then there's Strikeforce champion Gilbert Melendez dominating Dream champion Shinya Aoki. Melendez, to his credit, wasn't trying to claim after the fight that he's now the best lightweight in the sport, but he did make the argument that he's in the top three, presumably meaning along with Edgar and Penn. I don't have him quite that high, but I do have him moving up my latest lightweight ranking, which is below.

(Editor's Note: The fighter's rankings the last time we did lightweights are in parentheses.)

MMA Top 10 Lightweights
1. Frank Edgar (7): Many fans and members of the MMA media believe he was handed a gift of a decision by the judges, but I believe Edgar deserved to beat Penn and is the legitimate lightweight champion of the world. At least for now.

2. B.J. Penn (1): Penn's corner was asking him to take Edgar down and submit him, but for some reason he wasn't listening. I don't think he'll repeat that mistake if they fight again, which is why I would favor Penn in a rematch.

3. Kenny Florian (2): He'll probably fight on the UFC's planned August Boston card. I'd like to see him take on Gray Maynard.

5. Gilbert Melendez (7): What's next? There's been talk of a rematch with Aoki in Japan, which, despite Melendez's dominance in the cage, could be interesting under Japanese rules. Strikeforce doesn't have many other options for Melendez, other than perhaps a third fight with Josh Thomson. It's also possible that Melendez could be suspended for his role in the brawl at the end of Strikeforce: Nashville.

6. Shinya Aoki (2): I love his creative submission style, but Aoki just doesn't have the striking or the strength to beat the best American lightweights. Then again, Aoki needed only 92 seconds to force Eddie Alvarez to tap with a heel hook.

7. Eddie Alvarez (4): If everything goes according to plan for Bellator then Alvarez, its lightweight champ, will beat Josh Neer in a non-title bout next month and then get matched up with Roger Huerta in Season 3.

8. Tatsuya Kawajiri (8): I'd like to see Kawajiri take on Aoki next. There's also talk he may fight K.J. Noons.

9. George Sotiropoulos (9): He's expected to fight Kurt Pellegrino in July; with a win Sotiropoulos could be very close to title contention.

10. Tyson Griffin (10): I'm very excited to see how Griffin does against the undefeated Evan Dunham at UFC 115.