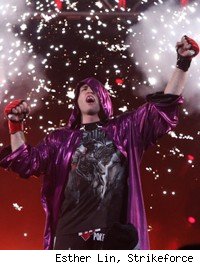 The Saturday Night Fights show on CBS ended on a note that has been described as "disgraceful" and "disgusting" when Jason Miller confronted Jake Shields in the cage, setting off a full-scale brawl.

On Monday morning, Miller acknowledged that he screwed up and gave CBS viewers the wrong ideal about mixed martial arts.

"I take full responsibility for entering the cage and setting off a chain of events that cast a dark shadow on the sport," he wrote on MayhemMiller.com. "I've been a fighter and a fan of MMA for over 12 years, and would never do anything to intentionally tarnish the sport I've given my life to. In the excitement of the moment I let my emotions run high and made a bad choice that resulted in a debacle, for that, I sincerely apologize."

The show got relatively weak ratings, which means there's a chance that Saturday night was Strikeforce's last event on CBS. If it was, the brawl was the last thing viewers saw of Strikeforce on CBS, and for that Miller apologized.

"I would like to formally apologize to CBS, Strikeforce, and all fans of mixed martial arts for my role in the events following the Strikeforce: Nashville event," Miller wrote. "In retrospect, my timing could not have been worse to ask for my rematch with Jake."

He's right about that.