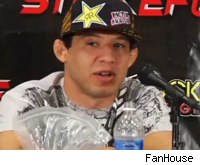 After thoroughly outworking the man many believed to be the world's No. 2 lightweight, Gilbert Melendez voiced his belief that he deserves consideration among the world's best 155-pounders. The 28-year-old improved to 18-2 by knocking off Japan's Shinya Aoki, who he added to his list of victims alongside notables like Josh Thomson, Tatsuya Kawajiri and Mitsuhiro Ishida.

And though Melendez said after the event that he'd be willing to fight several lightweights in the Strikeforce or DREAM promotions, when asked who he'd square off with if he could play matchmaker himself, he had a couple of other ideas.

"You know who I'd like to fight? Honestly, I'd like to fight Georges St. Pierre," Melendez told MMA Fighting. "But also someone like BJ Penn or Frankie Edgar right now, for sure. I want another big challenge."

As Melendez himself noted, none of those options are very realistic, but they represent his dream fights for now. A few minutes before that, in speaking to a pool of reporters, Melendez mentioned other possibilities.

"I'd like to go to Japan, fight Shinya and take the DREAM title, or co-promote with Bellator and fight Eddie Alvarez," he said, before later adding, "I think it'd be great if all the organizations could get together to co-promote and be done with it."

Strikeforce and DREAM have been the most active organizations to co-promote while Bellator CEO Bjorn Rebney has voiced a willingess to co-promote, but has yet to do so. The UFC has a general promotional belief against the practice.

Wherever and whoever Melendez ends up fighting, he will need some time to heal before stepping back in the cage. Melendez injured both of his hands during the fight and wasn't even able to pick up his Strikeforce championship belt or shake hands with well-wishers afterward.

Melendez said hand injuries have been an ongoing problem for him, though he did not yet know the severity of this go-round.

As to his part in the post-fight brawl after his Cesar Gracie teammate Jake Shields' win, Melendez was remorseful, apologizing during the press conference, and later privately to at least one CBS excutive.

"It's disappointing, that's not what we're really about," Melendez said. "I feel really bad about the whole thing. It's Jake's moment. I'm sad about how it went down, and about Mayhem jumping in there. It was about my boy, Jake. We wanted him to have the spotlight that he earned."