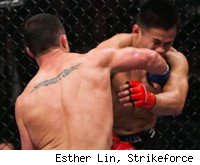 NASHVILLE, Tenn. -- It appears Cung Le will get the chance to avenge his only loss.

Strikeforce is moving towards a rematch pitting Le against Scott Smith, a source with knowledge of the situation told MMA Fighting. The fight has not yet been signed, but the company is moving in that direction, the source said.

If it is signed, the fight would likely take place on a June 26 event.

Smith knocked out Le at 3:25 of the third round in a wild battle last December. Smith had struggled in the early part of the fight and was behind on the judges' scorecards when he connected on a powerful right that floored Le, and led to the fininshing flurry.

The June 26 card is expected to be headlined by Fedor Emelianenko and Fabricio Werdum, but first Strikeforce will have to finish the ongoing renegotiations with Emelianenko.