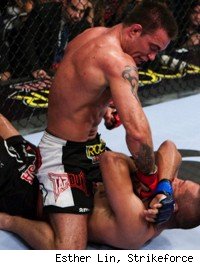 NASHVILLE, Tenn. -- On the outside of Bridgestone Arena is a huge banner that celebrates the city's hockey team, the Predators. It has a collage of players, and underneath, a slogan in huge block letters, reading, "Welcome to Smashville."

If Jason "Mayhem" Miller had noticed the warning, perhaps what transpired at the conclusion of Saturday's Strikeforce: Nashville show would not have happened.

Miller, who was a late addition to the card mostly for his name recognition, set in motion a chain of events that led to a wild brawl just after the conclusion of Jake Shields' successful middleweight title defense against Dan Henderson.
As Shields was about to begin his post-fight interview with CBS announcer Gus Johnson, Miller somehow found his way into the cage, interrupting Shields' moment in the sun, possibly to challenge Shields for a rematch of their Nov. 2009 bout. The two exchanged a quick word before Shields shoved Miller backward and all hell broke loose.

Shields' corner was in the cage after celebrating with him, and they went after Miller, who was badly outnumbered in the melee. Order was restored after about one minute, and Miller emerged from the cage laughing, but could be seen walking to the back with a bloody ear.

Afterwards, there were plenty of apologies for the unsportsmanlike outburst which stole some of the spotlight from the championship triple-header.

Coker was not in the arena to see the brawl, having made his way to the backstage area to prepare for the post-fight press conference. He said he would take time to review the tape and reserved the right to discipline any Strikeforce fighters involved.

Aside from Miller and Shields, Strikeforce lightweight champ Gilbert Melendez and welterweight champ Nick Diaz were also involved, along with his brother Nate, who fights in the UFC. (Shields, Melendez and the Diaz brothers are members of the Cesar Gracie fight team.)

Shown a picture of the chaotic scene after the press conference, Coker looked at Miller, surrounded by the Cesar Gracie fight team, with Nick Diaz cocking his fist and about to hit Miller, and shook his head.

"That looks really aggressive," he said.

The general consensus seemed to be that Miller was at fault for barging in on Shields' moment and invited the trouble, though he did not appear to be the one to throw the first punch.

Shields said he was very angry at Miller "getting into [his] face" and stealing his spotlight.

Melendez, though, said he had nothing against Miller before tonight, but said the Cesar Gracie team members are so close that they protect each other like brothers, and that protective instinct kicked in when things got physical.

"It's disappointing, that's not what we're really about," Gilbert Melendez told MMA Fighting. "I feel really bad about the whole thing. It's Jake's moment. I'm sad about how it went down, and about Mayhem jumping in there. It was about my boy, Jake. We wanted him to have the spotlight that he earned."

Afterward, Melendez went up to a CBS executive and apologized for the mayhem.

Now the question is whether there's any backlash from CBS for what happened. All major sports have temper flare-ups and even brawls from time to time, but MMA is still in its infancy, and has less room for error.

"I'm over it," Shields said later. "It's not that big of a deal. I guess Mayhem wants a rematch, but he's got to beat a real opponent. No disrespect to the guy he beat, but that's not an opponent worthy of a rematch. I beat Dan Henderson tonight. Who'd he beat?"