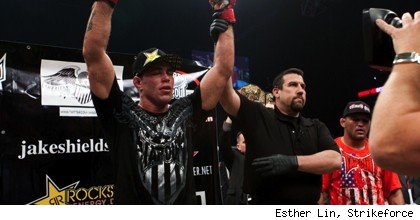 NASHVILLE, Tenn. -- The King got his crown, Japanese MMA suffered a national blow, and an underappreciated champion beat a legend, but in the end, it was a night of Mayhem.

Strikeforce: Nashville offered up three championship bouts, but it was a fourth, unscheduled match that unfortunately left with the buzz. At the conclusion of Jake Shields' five-round decision over Dan Henderson, a brawl broke out after Jason "Mayhem" Miller party-crashed the cage to challenge Shields to a championship rematch.

Miller, as he is one to do, found a way to steal the spotlight with his unnecessary intrusion on Shields' airtime, but what it led to was worse, as the images of the Diaz brothers beating on a downed Miller won't reflect well on a sport still fighting for mainstream acceptance.

The brawl aside, it was a rather historic night for Strikeforce at Bridgestone Center in front of 8,196 fans, capped off by Shields reeling off his 14th straight win by grinding out a decision over the former two-division PRIDE champion.

To do so, Shields had to fight through a horrific first round in which he was blasted in the opening minute of the fight and nearly knocked out. In fact, he later said it was the hardest he'd ever been hit, and didn't remember most of the first round or what his corner told him between rounds.

"I was a little disoriented," he said. "I was fighting on instincts. I didn't want to go out there and get embarrassed. I didn't want to lose. To lose in the first round would've been an absolute embarrassment. So I kept fighting."

Shields turned it around soon after, controlling Henderson from the beginning of round two onward. He had little problem timing Henderson's right hand and changing levels for what became routine takedowns as the fight went on. Showing his ground pedigree, he switched from one dominant position to another as he looked for finishes, but that proved elusive.

Shields later said that he was hoping to get Henderson to give up his back, but the crafty veteran never did so.

With the win, Shields will go into free agency as a major belt-holder on a long winning streak. Shields said he expected to go on vacation for the next couple of weeks and let his management team come up with a plan for his future, though of course Coker is very interested in keeping his champion and UFC President Dana White has voiced an interest in him as well.

"Our 185-pound class is pretty deep, we have lots of guys to fight Jake," said Coker, before Shields threw out names like Scott Smith, Ronaldo "Jacare" Souza and Scott Smith.

"And Mayhem obviously wants to fight me," Shields added to a laugh.

Lawal snapped Mousasi's 15-fight win streak and stayed unbeaten, improving to 7-0 by capitalizing on his superb wrestling skills to grind out a decision.

Mousasi could never get his offense started as Lawal forced him to spend the majority of the fight on his back. Though Mousasi has an excellent ground game, Lawal stayed out of trouble, using ground and pound to score points in marching to victory despite suffering an eye injury that left his eye swollen shut after the first round.

Lawal said that he'd once dealt with the same thing during a wrestling competition, so he knew how to gut it out. While it may not have been a masterpiece, Lawal should get credit for his game planning and the way in which he stayed out of danger. Though he likes to show his flashy side, Lawal is a true student of the game who studies fight tapes religiously and understood what type of fight was going to favor him.

Melendez Dominates Aoki
Gilbert Melendez wanted to prove a point to critics about his place in the world's lightweight division, and he did so, completely shutting down the man who many believed to be the world's No. 2 lightweight, earning a decision over Shinya Aoki.

Aoki, who favors his submission game above all else, appeared lost about midway through the fight, as Melendez dictated the terms of the fight without mercy, stopping Aoki from taking him down, but then sometimes moving into his guard and spraying him with strikes from the top.

"I just wanted to show I'm a complete mixed martial artist," Melendez told MMA Fighting. "There are lots of guys who are good at one thing or another, I think I've proven I can do it all."

Melendez said that he had a few moments of jitters early when the fight did go to the ground, but as soon as he fought off some of Aoki's first submission tries, he relaxed after realizing he was in control.

"That guy's tricky, you make one mistake and he gets you," he said. "It was around the third round, he was in deep and stuffed his shot. I saw the look on his face, and I thought, 'I broke him.' I knew he wasn't going to be confident in his shot anymore and I couldn't relax, but I felt like I had it."

Aoki looked devastated following the defeat, crying as he walked out of the ring and toward the back. Later, when asked about what the result meant towards the Japanese vs. American MMA debate, he said, "The result of the fight says everything."

Mayhem Wins in Return
Jason "Mayhem" Miller promised a more serious approach to fighting, and he was downright businesslike for his preliminary bout, dismantling Tim Stout in just 3:09.

Aside from his entrance, which featured breakdancers performing alongside him as he walked up the aisle, Miller wasted little time. He quickly took Stout down to the mat and worked him over, finding his chin with overhands. He fed Stout a steady diet of heavy strikes until referee Mario Yamasaki deemed Stout unable to defend himself and called a halt to the action.

Miller improved to 23-7 with one no contest, winning in his first bout since dropping a middleweight title bout against Shields last November.